The flamboyantly-named South River is a town of about 1100 people just 45 minutes south of North Bay.

I have to admit, my acquaintance with South River has always been brief.  I don’t usually stop in South River – if I’m still up for a coffee I usually get it in Sundridge, and bomb it the rest of the way to Orillia (if I’m headed south) or to North Bay (if I’m going north.)

South River is really a village with a bit of an outdoorsy bent due to its proximity to Algonquin.  For those not fond of Mother Nature there is an annual arts festival and the South River Black Fly Festival that tries to put a super spin on a super pest, or at least showcase the area’s most famous local invention – the Black Fly Suit. 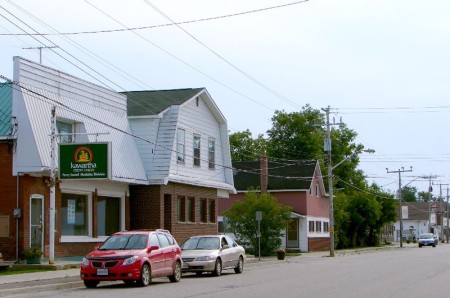 South River history has some interesting aspects.  South River was founded in the 1860s when Fraser Lumber started logging nearby Algonquin Provincial Park.  Hotels sprouted up in 1881, hydroelectricity twenty years later, and in 1907 the town was officially formed.  South River was home to the Standard Chemical Company, which made wood alcohol and other forest-derived products.  In 1934, Italian and Finnish workers led a massive strike.  German prisoners of war were held in South River in the 1940s, with the more radical ones sent further up Highway 11 to Monteith.  South River also sold the Shay locomotive to Abitibi Consolidated for use further north. The Shay now sits in Iroquois Falls.  It is now home to the Bear Chair Company.

There is a local farmer’s market in the summer and some small art studios with pottery and glassware.  There is also a train station, an arena with year-round ice, a curling club, tennis courts, a baseball field, library, daycare, Legion, and two retirement complexes.  And a beer store and an LCBO.

South River is home to the Hockey Opportunity Camp, Swift Canoes and Kayaks, and, as I’ve been told via email more than once, it is also home to “Mr. Meat”, which is supposedly a pretty good grocery store that sells a variety of high quality, ultra-fresh meats.