Iroquois Falls isn’t right on Highway 11 – it’s about 15 kilometres away at the end of road 67.  Founded more than 90 years ago, Iroquois Falls is home to a big pulp/paper mill and three electricity dams — all of which together used to be the world’s largest pulp and paper operation. 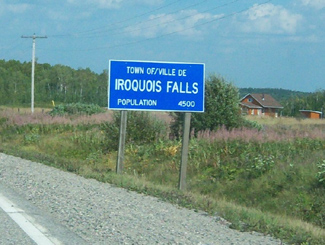 Iroquois Falls (pronounced locally as Urr-roquois, not Ear-roquois) is about half anglophone and half francophone.  The town is split in two by the railroad, and crisscrossed by the tracks at an innumerable amount of locations.  (I wonder if Iroquois Falls has the highest number of railroad crossings per capita in Ontario.)

Interestingly, the west half of the town seems to have English street names, while the east side’s streets are in French.  There is even rue Synagogue – a testimonial to the Jewish population that once settled in northeastern Ontario.  And while we’re on street names, there’s also Oil Tank Road, which is just begging to be the name of a country album.

Iroquois Falls was comprised of at least three communities – Iroquois Fall, Ansonville and Montrock. Amalgamation has put them all together under one municipal roof. 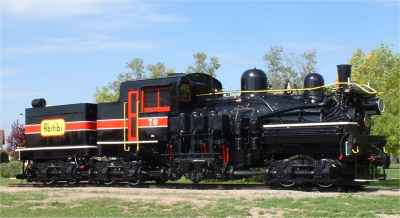 The Abitibi Arena in Iroquois Falls was built entirely by community labour in 1955. Actually, at the time it was billed as the largest community labour project in North America. A large contributor to the project was personnel employed by the paper mill. If a part or piece of equipment was needed somewhere during the construction apparently it was readily made by a millwright over in the paper mill. 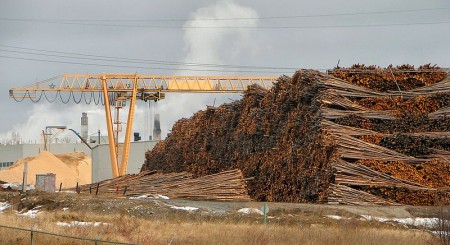 Known as “The Garden Town of the North”, Iroquois Falls is home to The Shay, an old restored locomotive that used to work the Abitibi line.  The town is also home to the Abitibi Eskimos, a junior hockey team that draws record numbers in the Northern Ontario Junior Hockey League.  I’ve heard that people come from as far as Kirkland Lake to watch the Eskies.  Iroquois Falls celebrates Paperfest in August and the Moby Pike fishing Derby in July.  There is also a Pioneer Museum in town chronicling the rise of the forestry industry and settlement of the town.

Iroquois Falls used to be the home of a large, wooden hotel that was served by an fantastic dining room. Unfortunately, it is no more, either being torn down or burned down at some point before I had a chance to have a meal. Randy’s Rec Room is a pub serving surprisingly good food and the service is top notch.  For food there is also the Main Street Café, the Bus Stop Chip Stand, DJ’s pizza, a diner, and a Tim Horton’s.  There’s a motel when you’re coming into town, but I don’t think the adjoining steakhouse has been in operation for years.  There are some bank branches and a caisse.  Esso (west of the tracks) and PetroCanada (east of the tracks) are in town as well. And the Silver Grill is a Chinese place serving 100 percent northern Ontario Chinese food.

Iroquois Falls is a pretty nice town.  There are nice old houses, a few parks, and a marina at Twin Falls that provides access to the massive Lake Abitibi.

Thanks to Paul for the info on Iroquois Falls.