I had written the letters ‘LCBO’ maybe twenty times on this site when I realized – if you’re a visitor form outside Ontario, you’re not going to know what this is.  The LCBO is the largest purchaser of alcohol in North America.

LCBO stands for Liquor Control Board of Ontario and is the government-owned liquor store monopoly across the province of Ontario.  You can’t buy liquor or beer in any corner store or variety shop in Ontario.  You can only buy liquor and wine at the LCBO, a government owned liquor store.  There are LCBO stores in almost every city and town in Ontario.  And those towns that are too small for LCBO get agency stores, where an independent grocery or variety store can have an LCBO corner with some alcohol products available for sale.  There is some sort of LCBO store or agency in every town in northern Ontario (which may say something about local pastimes in the north…) 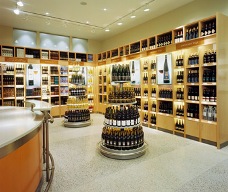 LCBO in a southern community

The LCBO used to be this warehouse type place where you picked up a form, checked the appropriate boxes indicating the products you wanted to buy, and some guy would go in the back and bring your liquor or wine out for you.  There was something about the place that just told you that yes, you were indeed in the process of sinning. (I’m just joking about sinning.) But a lot has changed.

Today they have all the bottles out there for your viewing, you select you own stuff, they sell wine, liquor, and beer, staff are around for help, there are lots of information and promotional materials, and most of all if you come in on a particularly magical day there may be free samples!

LCBO in a northern community

The LCBO even produces brochures now that are so glossy, bright, professionally done and nicely photographed that they make you practically want to lick the alcohol off the page…