“Sunny Sundridge village by the lake, only two and a half hours from Toronto.”  Yeah right!  Lake – yes, sun – maybe (it rained the first two times I visited, and was cloudy on the third).  But two and a half hours north of Toronto?  Maybe at 3 AM doing 140 the whole way and not seeing a truck the whole time. Or maybe I just drive too slowly… 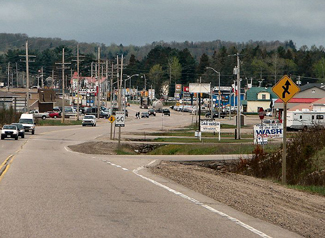 Sundridge is a village of about 1000 people strewn along the east side of Highway 11.  Established in 1889 on the shores of Lake Bernard, Sundridge is a former lumber and rail town that now finds itself as pretty much the northernmost extent of southern Ontario cottage country.  One my highschool teachers left their job for a high school in Sundridge, apparently for the solitude and seclusion.  Let me tell you, if you’re looking for quiet and minimal company this is the right place.  Sundridge is small and, for a southern Ontario town, situated pretty far north.

Sundridge is kinda funny because it’s a name no-one really wanted.  Originally the town was supposed to be named Sunny Ridge, but when they applied for the name in the late 1800’s Canada Post made a mistake and registered it as Sundridge.  As long as the mail came it really didn’t matter, so it stuck. 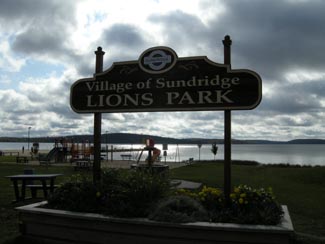 This photo is so bad I’m almost proud of it

The Sundridge that most travellers see is a relatively nondescript rail crossing on the highway with some truckstops and a factory or two on Highway 11.  However if you turn into town you’ll find that although tiny, Sundridge isn’t half bad.  There is a nice little waterfront park with a playground and a little beach on Lake Bernard.  There is a “resort hotel”, a few car dealerships, a grocery store, a LCBO, and a Legion, along with a few other stores like Home Hardware. There is Ten Gables Golf Course, fishing charters, and snowmobiling, icefishing, and sugar shacks in the winter.  Sundridge also hosts an Agricultural Fair in the fall.

Sundridge made national news in August 2008 when the employees of the local Ford dealer won half of Canada’s second-largest lottery jackpot ever. Twenty-five people split 22.5$ million. The owner said that he didn’t expect to lose anyone to retirement right away…they must be a really dedicated lot.

Being in cottage country means that Sundridge has a few more amenities than its neighbours to the north.  There are five bed and breakfasts (Lakeview, Maple Sugar, Mitchell’s, Belrose, and Entwood Forest,) the Relax Shack Retreat, Allenby Cottages, a trailer camp, and a few motels.

For food there is Danny’s Justa Pasta a bit south of town, Double Decker burgers, Ha’s Chinese, a deli, a café, and the Stieirhut Schnitzel Haus (which I’ve always wanted to try, but never have – I love schnitzel).  I had a good breakfast at Jim and Elsie’s Café. In town I also bought the most stale, overpriced croissant ever – I didn’t know that the price of croissants was indexed to the price of gas to rise as you go up the highway. 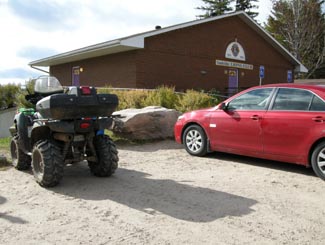 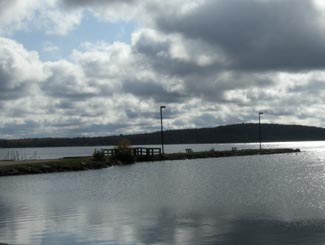