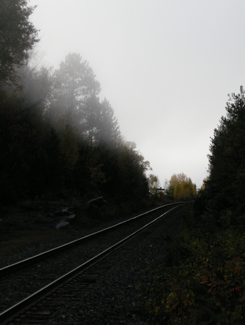 Sure, after Huntsville the towns become sporadic, a bit less refined, and really small – but those areas are still within relatively short driving distance to either Barrie and/or North Bay.

But it is after North Bay where Ontario changes.

Hamlets that wouldn’t warrant a sign in southern Ontario make it into maps, travel guides and guidebooks about the north.

Temagami is the perfect example.  Not only do you not realize just how far away it is from North Bay (more than an hour), but it’s also really small.  The dots-on-the-map before Temagami aren’t really true towns at all, they’re much closer to being dots-on-the-map. And when you get into Latchford, you realize that it is much the same as Temagami.

If you don’t have some decent cassettes for the car by now, you’re in trouble from here on in.  You’ll start seeing more transport trucks than cars. Of the few cars on the road, they’ll practically all be domestic, and will likely have an ATV in tow. The distances are only going to get larger and the roads will only get lonelier.

OK, so a bit about Temagami

Temagami is a town of about 1000 an hour-plus from North Bay.  The town was first settled in 1850 when the Hudson Bay Company set up a trading post on Lake Temagami.  The ONTC railways came through in 1904 as silver was found in Cobalt to the north, and Temagami became a town of trappers, traders, and prospectors. 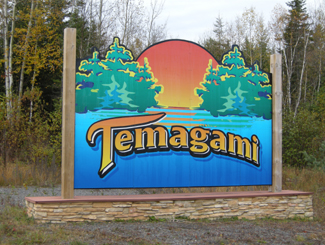 From Highway 11, Temagami is a land of contrasts.  Some spots can be boring as heck.  Rocks and trees, rocks and trees.  Others, however, can be surprisingly beautiful. On a recent trip to the area we didn’t take many photos of Temagami, mainly because the scenery was so majestic, it was nearly impossible to discern what was photo-worthy and what wasn’t, without taking photos practically every ten minutes. We actually experienced scenic fatigue, and by the end of our trip we were turning our noses up at lakes, forest scenes, and vistas we would have stopped for has we been in southern Ontario. And we didn’t even go into the interior, or explore Lake Temagami, which is reportedly more scenic than the area directly off Highway 11. 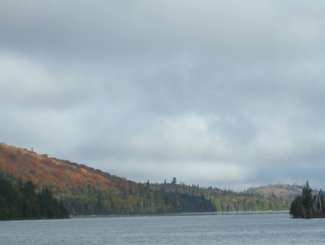 One of the many reasons for Temagami’s beauty is that it is one of the last parts of accessible Ontario with old growth forest, and was the subject of intense protests against logging in the 1980s.  Temagami is Ojibway for ‘deep water by the shore.’  It is also where Englishman Archie Belaney found fame as Grey Owl, an Aboriginal devoted to environmentalism.

Today Temagami is largely dependent on forestry and tourism. There are two provincial parks nearby, Finlayson and Lady Evelyn-Smoothwater.  Temagami is a starting point for a number of all season activities, including boating, dogsledding, canoeing, cross country skiing, swimming, fishing, camping, houseboating, hunting, and guided tours.  There are also a nature interpretive centre, some craft shops, and an art gallery. 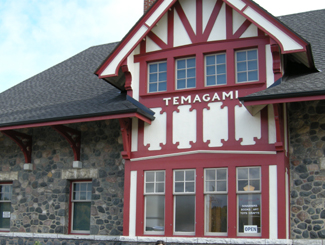 Temagami has a few tourist amenities.  There’s a gas station, the aformentioned grocery store, two outfitters (one of which was closed and for sale during our trip), two outdoors stores, two restaurants (one Chinese, and the Busy Bee) and a couple of shops.  There are numerous camps, lodges, and other places to stay, including Inn The Woods Motel and Bed and Breakfast, Leisure Island Houseboats, Linda’s Wigwams, Smoothwater Resort, and Temagami On-Ice Bungalows. There is a bit of a residential area on either side of Highway 11, and another a bit further north in what is called “Temagami North.”

Being on “Temagami Time”

You hear a lot about Temagami in the news and from friends who have cottages and cabins.  Yet I was surprised just how tiny the town is considering the tourism business up here.  There is a lot to do in Temagami if you like the outdoors.  But if you like the indoors, or just aren’t that woodsy, well, don’t expect much of a town or any indoor or evening attractions, because the town itself is miniscule, and what is available keeps weird hours – what I call “Temagami Time.”

The Co-op grocery store isn’t open on Wednesdays. Many offices or stores are only open half-days. The scenic rail route from North Bay, called the Dream Catcher Express, runs a meagre six days a year. One of the town’s two restaurants closes at 6 PM on some days. The Temagami tourism welcome centre, the Caribou Mountain fire tower info centre and shop, and the train station interpretive centre and gift-shop all close after the first weekend in October.

Most surprisingly for Northern Ontario, the LCBO closes at 5 PM (go to Latchford for an agency store that stays open ’til 8 or 9.) If you’re visiting Temagami after September, you better have electricity in your cabin or be prepared to go to sleep early, because nothing will be open and it’ll be dark – during our recent trip we experienced pitch black night during the second week of October at the late hour of 7.25 PM. So if you’re heading to Temagami, especially in the fall, be prepared to live according to Temagami Time. While I’m half joking, this is actually something to think about – I only became acclimatized to being on a late fall ‘vacation’ in Temagami – going to bed early, timing trips to stores and eating supper early – by the time my mini vacation was over! 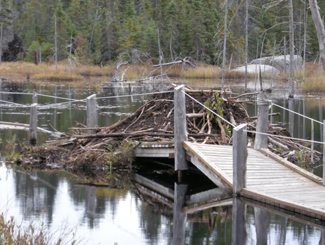 The area used to be littered with forest fire towers that were up to 1000 metres high – one of which has been maintained as an attraction that you can climb.  My partner and I attempted a climb on a windy, wet day in October. We’re not embarassed to admit we didn’t make it all the way up. She was a bit iffy to begin with, but considering we were the only ones there, the cold, biting winds, some slippery stairs, and the requisite creaking of the structure with each gust, we abandoned our climb 3/4 of the way through. It didn’t help that it was cloudy and that the lookouts built around the tower gave us the nice views we wanted without needing to climb. (No shame in excuses for me!)  I don’t think the tower is as tall as it seems, but considering it’s on the highest point in the area, it seemed very, very tall. The tower is one kilometre from Highway 11, east on O’Connor Drive up Caribou Mountain, but isn’t really visible from the highway, unless you’re looking for it. 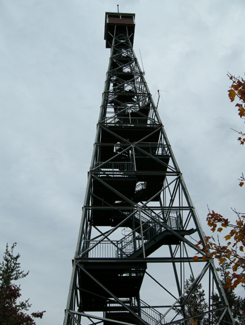 I’ll admit it. I bailed when the tower sighed under my weight and shifted with the wind

I enjoy hiking and Temagami has a lot of opportunities to get into the forest. The one problem is that many of the hiking trails are accessible only by boat. For example, there is a renowned stand of old growth pine on Bear Island, but that’s only accessible by an hour’s canoe, or by water taxi from the marina at the end of the Lake Temagami Access Road, 25 kilometres drive south and west of the town. Others are further in the bush, such as Lady Evelyn Smoothwater Provincial Park, which are accessible only if you’re willing to paddle and portage, or willing to pay for a float plane flight. Even the White Bear Trails that are right in town require a canoe trip (or a significant hike of three hours) to reach the best old growth forests.

Raised cottage in the bush

The trails that you can reach by car tend to be at the end of long, winding, unpaved logging roads that are no longer maintained, such as those at Grand Campment Bay, 40 kilometres east of town, anything off of the two Roosevelt Roads, or at Lake Anima Nipissing, just south-west of Latchford. Many are poorly marked, and do not directly indicate their skill level. We hiked one trail that turned out to not be the paths were throught we were on, another we considered following turned out to be an ATV route, and a third we never found at all despite following directions to a T. A fourth was a great hike, but was a bit beyond our capability. (Well, maybe not beyond our actual capability, but beyond our willingness.)

Anyway, I just want to say that hiking in Temagami isn’t as easy as driving up and looking for a trail sign. It’s not onerous, but it takes some planning – you have to do a bit of homework. 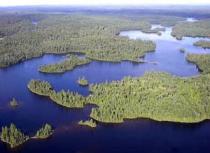 Obviously not my photo 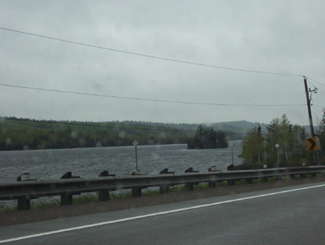 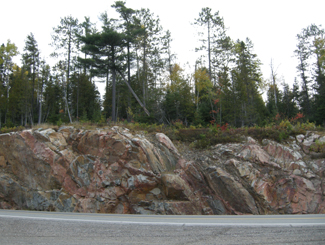 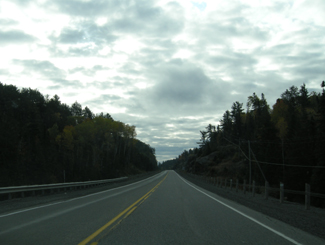