With the town motto of “The Best Little Town By a Dam Site”, Latchford signals the end of Temagami and the beginning of Temiskaming. (Scroll down to the bottom of the page for more photos.)

Like Smooth Rock Falls, another tourist guide I saw advises that Latchford is “the perfect stopover place for food, fuel, and tourist information” however I couldn’t really attest on my first visit – I was in a rush, Latchford was small, and you can’t stop everywhere each time you take a roadtrip. I’ve since visited and can confirm that, while tiny, Latchford is clean, quiet, and has some nice river access and good hiking nearby. 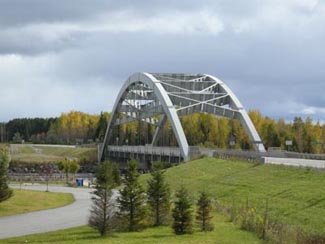 Like a mini Skyway Bridge made of big mechano

Latchford was founded in 1902 as a logging town on the Montréal River.  Steamboats used Latchford as a home base to pick up passengers on their way up the Montreal River to Elk Lake. Today the river is crossed by the newly restored Sergeant Aubrey Cosens Bridge. (And this is the second thing named after this guy – there’s also a heritage plaque near Iroquois Falls.) The bridge buckled in the winter of 2003 after it rusted to an unsafe state.  It was closed for months, cutting off all of northeastern Ontario from he Highway 11 artery it so relied upon. Trucks were forced to detour east through Témiscamingue, Québec, up and over Lake Temiskaming and into the Tri-Towns, or west through Sudbury, Gogama, and through Timmins – until a temporary bridge was built. Thankfully, it has now been fixed.

More interestingly, Latchford used to be the home of a big casino during the Cobalt mining boom.  Many miners and prospectors would come to Latchford to party and increase their fortunes, and of course to visit the dancers and prostitutes that called the casino home.  I think the town has quieted down sufficiently since then. 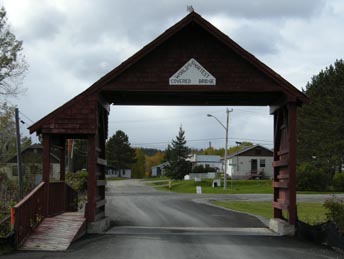 In Latchford there are tours along the Montréal River.  There is a little town museum (called the Latchford House of Memories) which opens in the spring and closes the second week of October. Latchford is also home to the Ontario Logging Hall of Fame, which has an old blacksmith shop, an icehouse, some old logging equipment, and a restored turn-of-the-century sawmill.  I’m surprised some environmentalists haven’t defaced the logging museum. Latchford is also known for having the world’s shortest covered bridge.  Every August they have their annual canoe and kayak races on the river. If you’re into hunting, the area around Latchford is good for bear, and is located in two prime moose areas. The whole of Highway 11 from North Bay to beyond Latchford is postered with “watch out for moose” signs everywhere.

Latchford is pretty small, but it has a decent spate of amenities. The town has its own tourist info centre (located in the municipal office) however it was closed in October when I was there last. There are many lodges, campsites, and RV sites nearby for accommodation, as well as a diner, a Chip Stand (LA Fries – it is for sale), a variety store, and a gas station in town. Latchford is home to an LCBO agency outlet which stays open until 8 or 9 PM. Wilks Restaurant (also called the Café Log Cabin Café) is housed in a trailer just north of the tourist information centre, and serves homemade food at reasonable prices. Wilks Restaurant has been highly recommended to me by people who live in the area. 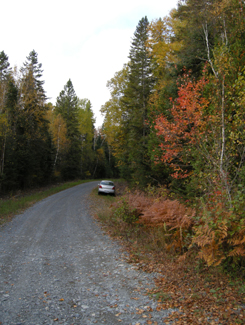 An ode to Fergus. My trusty, gas-sipping steed is now longer

I’ve stayed at Bay Lee Mac Camp, which is within Latchford’s southern limits, about halfway between Latchford and Temagami. While rustic (no electricity – all lights, the stove and fridge ran on propane) the cottage was clean, quiet, and serene – I don’t think I’ve ever been in a quieter place in my life. Located right on Rib Lake, Bay Lee Mac has water access for swimming, boating, and canoeing, provide organized hikes and hunts, and is located close to the Ottawa-Temiskaming Highland Trail.

Additional outdoors activities include the fishing derby in July – check it out here if you’re interested – and WJB Greenwood Provincial Park.