Longlac is approximately half way between Toronto and Winnipeg, and is 320 kilometres from Thunder Bay. So for me, on one particularly longish trip, making it to Longlac was kindofabigdeal.

There is nothing between Hearst and Longlac save for maybe a gas station (and I mean maybe) and the Klotz Lake washroom/swimming combo rest station on the side of the road.  The drive seems. to. take. for. ever. (ok I think I got my point across, it’s probably not that bad.)

So, for me at least, the oncoming arrival of Longlac was a big deal – finally, the end of this 200 kilometre stretch of nothingness…! It’s no surprise that the town’s Protestant church is named St. John-in-the-Wilderness.  And it wasn’t founded in the fur trading days either – this was founded ‘in the wilderness’ in, wait for it, 1943.

Today, Longlac is a former paper and forestry town trying to reinvent itself in a difficult economy and represents the westernmost edge of northern Ontario’s francophone belt – just under half its residents are French-speakers.  Hence the local  caisse.

Not immediately evident that this guy is supposed to pull logs

When you get into the town you’re immediately greeted by a horse statue and two beached boats.  The horse is pulling logs (which you can’t see unless you climb up the little hill to the statue itself.)  I think the boats are supposed to carry logs too. They seem to be the remains of a former miniputt course.  It’s too bad it can be a bit confusing to the visitor.

Longlac has a long history.  Prior to 1800 the town was a North West Company trading post.  In 1814, the Hudson Bay Company set up a rival post, and in the spirit of modern commercialism the two merged in 1821. There is a historical plaque with a statue of two guys in a canoe, representing the role of Aboriginal peoples and fur traders in building Longlac.  There’s also a town history board back at the tourist office/former mini putt site.

Longlac used to be a mill town but today, no mills operate in Longlac.  All three have shut down in the last few years. “Founded on fur, sustained by the forest” is Longlac’s motto, and considering that the forestry industry is contracting in northern Ontario, you have to wonder what a town of 1200ish will find to sustain itself. What other jobs can there be in the area? How long before parents have to start working in Alberta? It is communities like Longlac that you really feel for – they’ve survived this long. 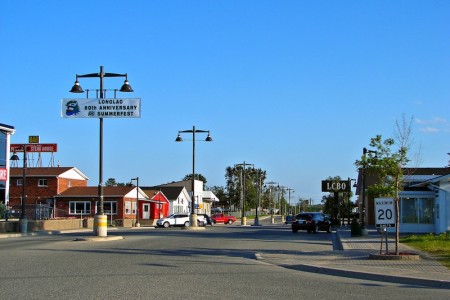 Longlac’s main strip is Forestry Road, which runs perpendicular to Highway 11.  It has a row of streetlights right in the middle of the road, which practically invites you to play a game of bumper cars with your vehicle.  What happens if you have to swerve for a dog?

Longlac has the requisite truck stops and third tier franchises of a Highway 11 town, with places like Robin’s Doughnuts and 2 for 1 Pizza.  There’s an LCBO outlet, a bed and breakfast (Lily’s), and what seems like the newest Rexall pharmacy in Canada.  (It is so shiny and suburban that it looks a bit out of place.)

Abandoned mini putt in Longlac, Highway 11.  I thought the horse and boat belonged to the mini putt!

Seriously? This is northern Ontario after all.

I hope to visit again. Maybe someone can send me an email and let more know a bit more so I can add it here.