Thornloe is a largely francophone hamlet on Highway 11 that is famous for cheese. 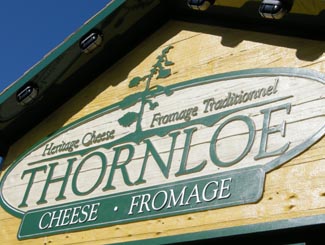 Its cheese is relatively cheap, well made, and is particularly known for its cheddar and hot pepper colby, as well as its curds.  It has been known for people to travel from North Bay, and Timmins, and beyond just for Thornloe cheese.  The Thornloe Cheese Factory is so popular that the Ministry of Transportation gave the factory its own turning lane on Highway 11 for safety’s sake. 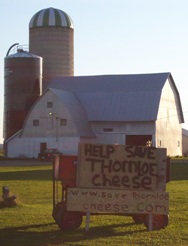 In July 2006, Parmalat International announced that it was going to shut down the cheese plant.  This started a storm of anti-Parmalat sentiment in the area, and residents (battle-ready from Adams Mine and Bennett Incinerator fights) were mobilizing quickly. I was in the area at that time – it was a really big deal. I’ve been back since, and it seems they’ve done some renovations. There is a new sign, the cheese has neat new Thornloe-specific packaging – it’s all pretty well done. The cheese was good too – my partner and I devoured some curds, making sure to save some for the next day.

Twenty kilometres north of New Liskeard, Thornloe is a tiny quiet strip of farms with a population of about 120.  Established in 1916, Thornloe is about five minutes west of Highway 11 and always smells like a fall fair.  There is a gas station right on the highway.  There is a playground, an outdoor ice rink, and two churches in town (one of which is for sale.)  There is a pioneer cemetery that I didn’t have a chance to stop at.

This is where the magic happens!!!

Thornloe is cute, but there’s really nothing to see other than the nice green hills and the acres and acres of farms.  I saw a wonderful orange sunset in Thornloe.  The Temiskaming Farm Belt may not be exciting, but if you like rural farm country then it sure is beautiful. 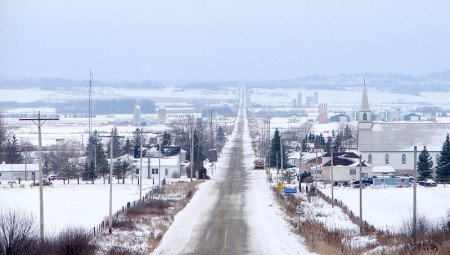 Maybe I’m nuts, but places like this just make me feel all warm and cozy.  Before I visited Temiskaming, I never expected scenes like this in northern Ontario (Credit: P199 at Wiki Commons)

Note that the Thornloe Cheese Factory is often closed after six pm, depending on the season.