One tourist guide I saw promotes Dymond as “the jewel of Temiskaming”.  While I think Earlton gives them a serious run for their money in the “jewel” department, Dymond is a nice little township of farms, big box stores, and fast food restaurants, where English and French are both spoken approximately equally. 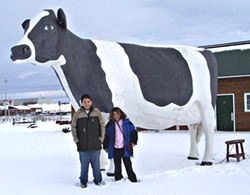 Despite its southern Ontario feel, Dymond is a northern Ontario town and therefore has to have “some big weird thing”.  That would be Ms. Claybelt the Oversize Holstein, as well as the model Mack Truck at Gilli’s Truckstop, both on the main Highway 11.  (That is not me in the photo – my camera conked out in North Bay and didn’t get charged until Kirkland Lake so I had to steal this photo from the town’s website.)

I thought that Dymond was in the Tri Towns but really it’s not, as the name refers to Haileybury, New Liskeard, and Cobalt.  Dymond was forced to merge with New Liskeard and Haileybury in the 1990s to form the municipality of Temiskaming Shores.  It is technically the oldest of the three townships, as it was founded in 1901.  Dymond has relied on its agricultural base to withstand the boom-bust economic of northern Ontario, and to this day retains a distinctly agricultural feel…that is, once you get past the strip malls.

Dymond has recently become a big-box-store, fast food, and motel haven.  Dymond is essentially the last spot to do any real shopping on Highway 11 between North Bay and Thunder Bay without taking a fairly major detour off Highway 11 into Timmins.  (I hope this doesn’t draw business away from New Liskeard’s fairly quaint downtown.)  There’s a Walmart, a Zellers, a fairly big Canadian Tire, a new steak restaurant, and a number of different fast food outlets including McDonald’s and the last Harvey’s on the whole of Highway 11.

This is important so let me re-ierate this – if you’re travelling west toward Thunder Bay, Dymond has the last Harvey’s on the whole of Highway 11.
There isn’t a tonne to do in Dymond – most visitors would be likely to skip it for New Liskeard or Haileybury.  However there is a golf course and some hiking available – stop at the tourist building on Highway 11b for more info.  There is also the Little Claybelt Homesteaders Museum, chronicling the rise of agriculture and the founding of the Tri-Town.  On main Highway 11 (west of New Liskeard) there is a little lookout with a nice view of the Tri-Town.