I was into maps as a kid.  Anytime I came across place that I hadn’t heard of before, I always took time to find it on a map.  But I remember this one place that I could never find, long before the time of Google Maps or GPS.  I subscribed to a magazine whose offices were in this town, or was it a hamlet, or a village, or whatever it was?  I could never find it.  It was Gormley.

Now I understand why.  Because, like so many southern Ontario municipalities, Richmond Hill is more of an agglomeration of former communities rather than a town gone big.  R.I.P. Gormley.  And Langstaff, Dollar, Carville, Headford, Elgin Mills, Jefferson, Bond Lake, Lake Wilcox, Temperanceville, and Richvale.  While I’m sure there are some that continue to self-identify as residents of those former hamlets, today they’re all part of Richmond Hill, a city of almost 200 000 people in the Region of York. 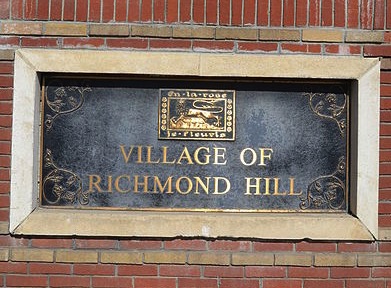 Not your average suburb

Another in a string of wealthy suburbs that straddle Yonge Street north of Toronto, Richmond Hill is a largely suburban bedroom community.  Fueled by reasonable house prices, pretty big lots, and the GO Train, Richmond Hill was Canada’s fastest-growing community in the 1990s.  (They passed the crown to Barrie in the 2000s.)  Today, Richmond Hill is having to grow up a bit, figuratively and literally.

Figuratively, as Richmond Hill isn’t the brand-spankin’-new suburb that it used to be.  Nothing stays new forever.  Richmond Hill’s had to deal with the decline of some of its more urban areas in ways that other GTA towns haven’t.  For a while there the main drag started to get a little grotty, with Richmond Hill being the home to the first strips clubs on appearing on Yonge Street north of the famous ripper’s-strip in Toronto.  The presence of adult businesses on the main drag can really empty out an area, particularly when coupled with the rise of the suburban mall and later the suburban power centre.  One strip club burned down, and the other(s) eventually packed up and hid elsewhere.  Today, Richmond Hill is revitalizing the streetscape, including new residential development and a fancy arts and entertainment centre. 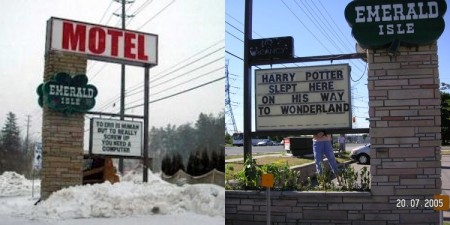 The Emerald Isle Motel puts the old in ‘old school’, harkenening back to the Yonge Street of auld. So much so that they’ve filmed movies here. (I got these photos from the internet.)

Richmond Hill has also had to grow up and deal with a decline in homogeneity.  Those affordable houses aren’t so affordable anymore.  A friend of ours bought a house in Richmond Hill in 2007 and we couldn’t believe how much she paid.  Now, we can’t believe how much she’d get if she sold it but even if she did, she wouldn’t be able to afford anything else in the area.  Though the average household income is 34 percent higher Richmond Hill versus the province at large, 15 percent of Richmond Hillers qualify as low income, more in-line with the provincial average than with communities to the north, where that rate is half.

And most notably, Richmond Hill is the most ethnically diverse community north of Toronto on Highway 11 / Yonge Street.  Whereas 85 percent of residents in Newmarket and Aurora are white, in Richmond Hill, one community to the south, this number is 53 percent.

And this means that, if you can get past the sprawl, Richmond Hill is kinda cool.  Twenty-five percent of residents are Asian.  More than fifteen percent are either Jewish or Muslim. Richmond Hill is still home to a smattering of Italians that left Toronto’s three Little Italies in the 1960s and 70s before all the Italians decided that Woodbridge was the place to be.  Ten percent of the population speaks Farsi.  Five percent speaks Russian.  Places like Richmond Hill can easily look homogenous to outsiders.  Considering the tendency of Toronto suburbs to take on a very ethnic-specific bent (I’m looking at you, Woodbridge and Brampton) there is a level of diversity here that’s not replicated in other Toronto sattelite towns. 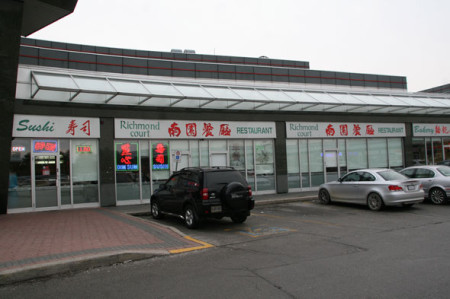 Richmond Hill is also having to grow up – literally, up – as the community approaches build-out.  Much like Willowdale and Thornhill before it, Richmond Hill is not immune to the pressure to find places for residents both fleeing Toronto house prices and coming from elsewhere.  Condos are being built on Yonge Street in Richmond Hill, and can be found dotting other areas of a community largely known for its plethora of single family houses.

Except Richmond Hill has it a bit different.  Willowdale is part of the City of Toronto and Thornhill is split in two between Markham and Vaughan.  Richmond Hill, on the other hand, is its own municipality.  This means that Richmond Hill has pretty unique opportunity to make some decisions as to how they’re going to handle the onslaught of hi-rise residential development that’s now jumping off the Toronto subway lines and into the first ring of outer suburbs.

If the Observatory becomes a condo they’ll have a bunch of out-of-this-world names to choose from.  Maybe they can ship it to Moonbeam or Nipigon?  (Photo taken from spacing.ca.)

Despite these developments, Richmond Hill is still very much dependent on Toronto for employment.  It was once known as a flower town like Brampton (the greenhouse industry left Richmond Hill in the 1970s and 80s for the Niagara region where land is cheaper and development pressures slightly more subdued) and later for the David Dunlap Observatory, at a time the largest telescope in the world, recently shuttered and sold by the University of Toronto.

These are a few of my favourite things

Today Richmond Hill is home to Apotex, one of Canada’s largest drug companies, and the head office of my favourite store in the world, The Bulk Barn.  If you’ve ever worked at the Bulk Barn, please accept my apologies.  I’m one of those customers that buys about twelve grams of sixteen different candies.  I really don’t mean to make life hard for the staff, but I just can’t help it.  I can’t make up my mind when presented with a selection like that. 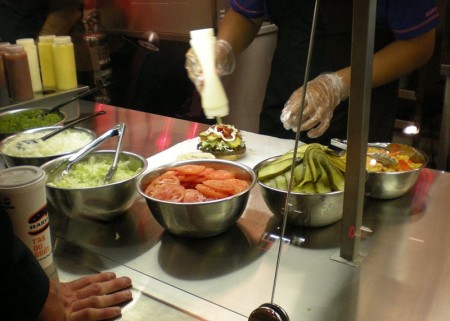 Mayo?  This ain’t a sub.  All you need is ketchup, mustard, lettuce, onions, banana peppers and extra-extra pickles, plus a few more pickles on the side if they’re willing.

Richmond Hill is also home of the first ever Harvey’s restaurant.  If you have been navigating this site for a while, you’ll realize that I’m a fan of Harvey’s.  Well, of any fast-food, particularly the second- and third-tier restaurants that aren’t available in every mall or plaza.  Sadly, the first-ever Harvey’s no longer stands.  Like seemingly everything in Toronto, it’s been razed for a condo development.

I’ve never understood why chains don’t develop their “first stores” into tourist locations.  I’d been to the Tim Horton’s on the corner of Ottawa and King in Hamilton probably twenty times before I realized that this was the first-ever Tim Horton’s.  Why not make it a tourist trap?  Why not make it a restaurant-slash-museum?

Why not restore it to make it look like it did when it first opened in 1960-whatever?  It’s not like having one store deviate from the bland overarching brand design will get everyone all confused.  Who wouldn’t want to sip a coffee sitting at one of those super-low counters on a tangerine-cushioned stool from a Tim Horton’s circa 1983?  I mean, think back to those terrible photos of teens, awkwardly staged hanging out on the woods or a tire-swing that every Harvey’s used to have on the walls? 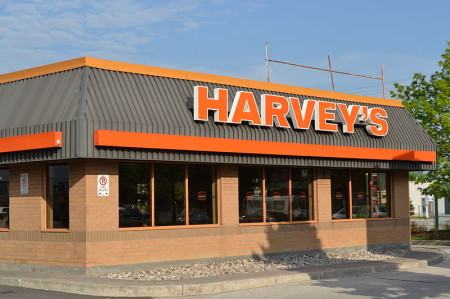 Now this is an old school Harvey’s. I can only imagine what they looked like when they were founded in 1959.