When you enter Mattice from the east, you’ll be greeted by a dinosaur.

T-Rex has no cultural significance to the town.  There isn’t a museum around.  He’s not the town mascot. To my knowledge no dinosaur bones have been found in the area. It’s just decoration on someone’s front lawn.  Think of it as an especially eccentric garden gnome. 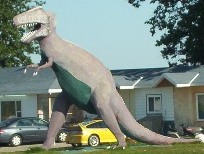 Mattice does its bit to continue Highway 11’s many “WTF? moments.

I’ve been told by a Mattice resident that the T-Rex was built by the owner of the Mattice Motel to attract tourists.  There used to be a stegosaurus in town, as well.  It turns out that the stegosaurus was destroyed by a new owner when the previous owner left to pursue his dinosaur dreams elsewhere.  Seriously.  It turns out he left to build a concrete Jurassic park in the Ottawa region.

A francophone town in the heart of French-speaking Ontario, Mattice (rhymes with ice) is one of these small northern towns (population approximately 500) on Highway 11 that has a little bar, an a full-blown LCBO, and a skidoo repair shop … but only the tiniest of grocery stores that would barely qualify as a fruit stand in more urban areas in southern Ontario.

Mattice used to be the launchpad for old fur trading expeditions

Set on the Missinaibi River, Mattice used to be a starting point for Voyageurs heading downstream for the fur trade.  There’s a historical plaque and one of Highway 11’s classier statues to commemorate its history.  About two kilometres upstream, there’s a traditional Aboriginal burial ground. 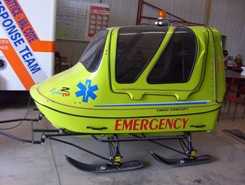 If you go north on one of Mattice’s side street you’ll find the nice riverfront park.  It’s actually quite a nice park, with a boat launch, a picnic area, and an inexplicable pile of rocks (that, it turns out, were used in the refurbishment of the Missinaibi Bridge.  And then left there for posterity’s sake.)

Lacking a woodpile, this pile of rocks will have to do