There’s something really interesting about Hearst.

Hearst is the frontier of northern Ontario – you either live in Hearst, east of Hearst, or you live waaaaaaaaaaaaaay west of it.  It even has a Northern Store (how’s that for remote.) 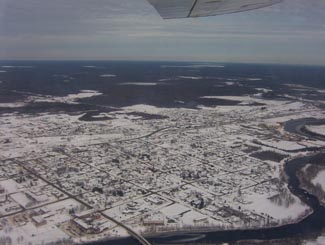 Hearst from the air

Where else would a town of 6000 have so many bars, the “northern ballet”, and yet still have four or five churches?

What other place keeps you in their town by telling you just how far away everywhere else is?  I mean, Longlac is 210 kilometres west, with nothing in between.  Hearst has the last McDonald’s for 500 kilometres – I know it because I checked, in person. There isn’t another McD’s until Thunder Bay…

The tourist office in Hearst. So awesome.

I once applied for a government job in Hearst, but never got an interview.  To be fair, I realize now that I was woefully underqualified.  I swear that the ad had listed French as “an asset”.  Well, no French isn’t an asset – in Hearst, it’s a requirement.

One of the most interesting things about Hearst, however, is that it is the most francophone community in Ontario – something like 85-90 percent.  Hearst even has residents that only speak French, and no English.  Rue George is the downtown drag and it’s really cute, with small shops, a library, a diner, and a movie theatre showing French-language movies.  It’s reminds me of Penetanguishene, but more with more French. 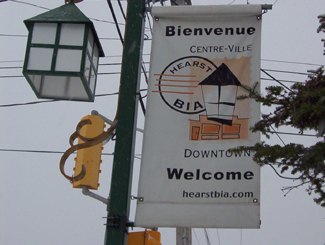 Erst (as it is pronounced locally) is a pretty special town.  It has: 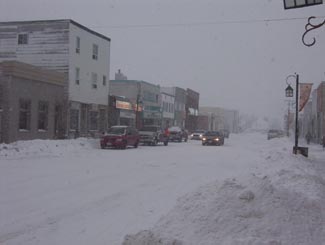 Trust me. When it’s not getting snowbombed, Hearst’s downtown is super cute.  The problem is that it gets hammered all the time.

Heck, I’ve been to Hearst three times.  Most of the photos here are from the first time that I hadn’t been snowed in (because it was August.)  Both other times, I was stuck for three days in storms even that locals found nasty.

Set on the Mattawishkwia River, Hearst is a forestry town (hence the massive woodpile.)  It also has a tourism industry set around hunting, outfitters, and its proximity to three Provincial Parks:  Fushimi Lake, Missinaibi and Nagagamisis.  It is also the end of the Algoma Line, which runs fall colours rail tours from Sault Ste. Marie to Hearst.

Despite its francophone heritage, Hearst was once the site of a Slovak settlement.  Bradlo, nestled 11 kilometres south of Hearst, the community persisted until the 1950s when the residents realized that the land was agriculturally marginal, and wouldn’t support farming in a modern economy. 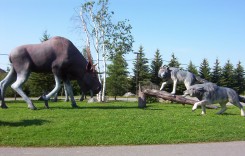 Hearst is so cool, this wolf vs. moose sculpture doesn’t even count as their “some big weird thing”… 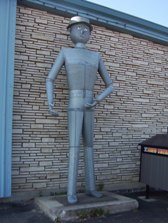 Food and Fun in a Frontier Town

Hearst is a center for most of the little communities west of Kapsukasing, and is the largest town between Thunder Bay and Kapsukasing on Highway 11.  And probably for Hornepayne on Highway 631, about an hour and a half south.  (Head off-route and take a trip along 631 here.)

Therefore, Hearst has an abundance of services.  It has the only McDonald’s and Tim Horton’s that you’ll see until Thunder Bay.  In addition to the 24-hour garage and towing company that is advertised throughout northern Ontario, there are shops downtown and food everywhere.  Hearst also has an overabundance of places that serve Northern Ontario Chinese Food.

Hearst has something for everyone – the northern ‘hotel’ scene (the Waverly or the Windsor), cafés (although Café Duo doesn’t serve coffee, go figure), fast food (McDonald’s, KFC, Subway, and the only Pizza Pizza west of Timmins), authentic chip stands (Micko’s is great), sit down restaurants (Mom’s, John’s, Pizza Place has ok pasta), fine dining (you can find filet mignon, steak, and Cuban cigars at Ailleurs), and even a little night club (OK, fine, it’s the bar at the Companion.) 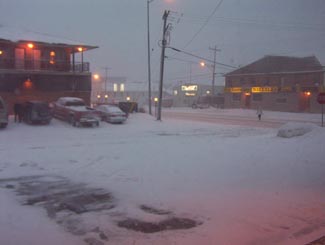 Highway 11 in Hearst, getting walloped, again

There are motels aplenty in Hearst so you should have no trouble finding a place to stay.  (A note to those staying at the Queens Motel, keep your kids away from the funny channels at the end of the TV dial there!)  There is also hockey in the winter – in fact, Hearst is the hometown of Claude Giroux, Philadelphia Flyers superstar, as well as Pierre LeBrun, a hockey commentator who has appearanced on TSN, ESPN, and Hockey Night in Canada. Hearst is home to the local team les Elans de Hearst. And, there is bowling.

Come on, it’s northern Ontario. Of course there is bowling! 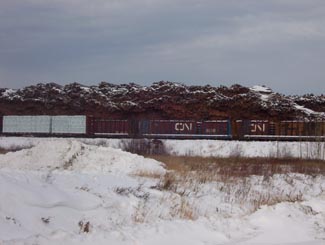 Hearst – simply the best woodpile of any Highway 11 community 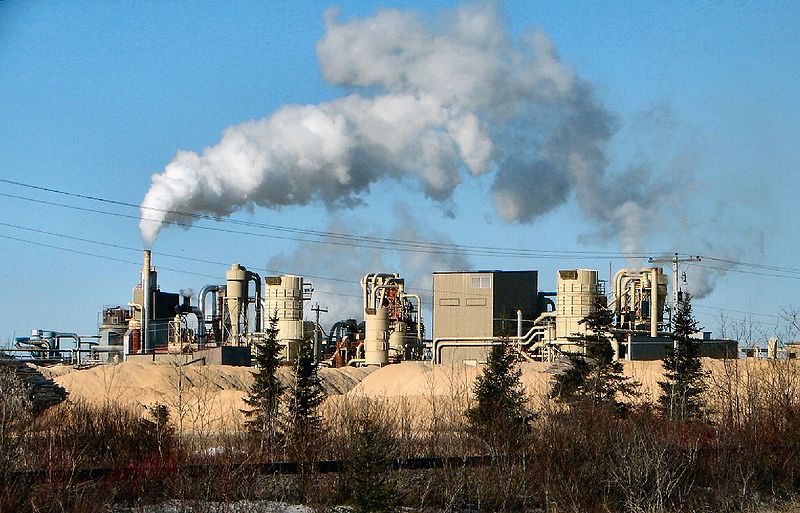 And this is what happens to a woodpile on Highway 11, in Hearst (Credit: Wiki Commons contributor P199) 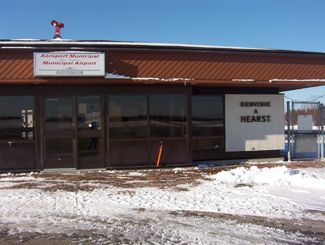 Not sure why I took a photo of Hearst’s airport