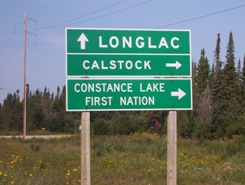 Turn north just west of Hearst to get to Constance Lake

Constance Lake is about six kilometres north of Highway 11. Constance Lake First Nation is a fairly nice community of about 700 people.  I’ve visited a few times but never thought to take photos before this trip, however I was anxious to make it past Hearst before lunch and therefore didn’t stop in on this journey.

There are advertisements for an Ojibway-Cree Heritage Centre on Highway 11 just west of Constance Lake.  However I think it is still under construction, even though it planned to open in June 2006.  This will likely be a worthwhile attraction for anyone driving between Hearst and Longlac. 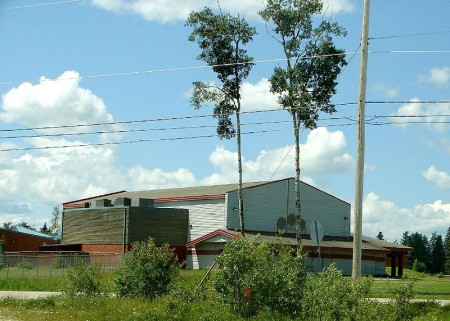 I almost ended up playing Friday night BINGO in Constance Lake and have always regretted that I didn’t get to have the experience.  Or a shot at winning a truck!Credit: User P199 at Wiki Commons.)

You can get gas in town at Norm’s Gas Bar, and for food there’s Kendra’s Diner on the outskirts of Constance Lake.  Other services include the Sutherland General Store, an outfitters, and a shop called Crafts and Things.  There’s also a post office and the Lecours Lumber operation.

Constance Lake is also home to a power project that uses discarded wood fibre to make energy.  It is visible from Highway 11, about 10 kilometres before you turn off to Constance Lake. 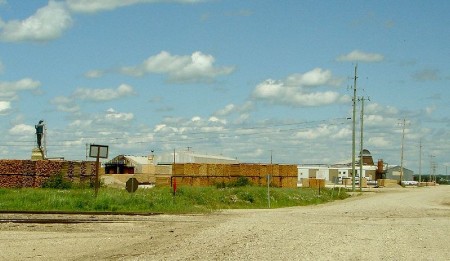 One thought on “Constance Lake”