But I really had to pee.

So instead of turning right to Muskoka Falls I turned left, following the instructions of the sign.  I’m sure it really didn’t take as long as it felt, but when you have to pee as bad as that kid in the Robert Munsch book, one minute feels like 10.

I followed a winding road through old farm land, a short bit of bush, past a cement plant, past a conveyor belt factory.  I don’t know what I might have missed or where I missed it, but I never saw another sign for any of those fast food joints.  I passed dinosaur, and a strangely placed totem pole and statue of a nurse, until I was faced by Marty’s World Famous restaurant, an ice cream parlour, and a couple of stores that sold cottagey stuff.

Somehow I had ended up on Manitoba Street.  I was smack-dab in the cutesy cottage country downtown of Bracebridge.

Bracebridge is a town of 13 000 right smack dab in the middle of cottage country.  It is one of the three main towns of Muskoka, the other two being Gravenhurst and Huntsville.  It is not directly on Highway 11 – just a smidge west of it. 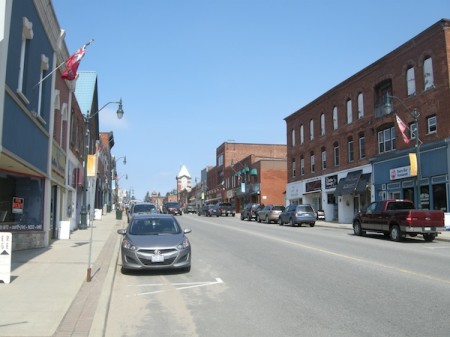 Named after the book Bracebridge Hall by Washington Irving.  I believe the local postmaster was reading it at the time the town was to be named.  Gravenhurst also had the same postmaster, and was also named after something in the same book.  Bracebridge is exactly halfway between the equator and the North Pole.

Today Bracebridge, being in the heart of the Muskokas, is all about tourism – as evidenced by another random dinosaur, a distinctly aubergine-painted bike shop and a store advertising the largest selection of Muskoka tshirts in the country (I knew that Muskoka had appropriated the Adirondack chair, but I didn’t know Muskoka it had laid claim to its own style of clothing.) 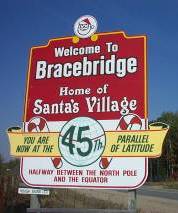 Being a tourist town, Bracebridge is relatively full of places to eat, drink, and sleep and have fun.  You’ll have no problem finding accommodation.  I mean, book ahead of course (especially during the summer!) and don’t just show up expecting to find something.  But you don’t need me to tell you where to go in cottage country because places abound.

The main tourist attraction in Bracebridde, aside from cottages, is Santa’s Village.  I have a friend who is 37 years old and he can’t stop telling me how magical it is.  Whatever.  Maybe because it is relatively cheap.  He also likes that it’s in off the highway and in the bush.  It’s low key and kid oriented, but supposedly inexpensive and not too touristy.  And it’s full of men with bad beards, if you’re into that kinda thing.

Bracebridge is home to Woodchester Villa, one of the finest octagonal houses in Canada.  As well, Guha’s Lions and Tigers is a little lion and tiger zoo in Bracebridge and is another one for the kids to see.  There is also golf, boating, art, parks, cottaging, camping, snowmobiling, a water park, a movie theatre, a little film festival put on by the highschool, and the Festival of the Falls which celebrates the 22 waterfalls within Bracebridge’s fairly expansive town limits (one of them is even referred to as the north’s Niagara Falls – someone should tell that to Kakabeka.)   I arrived in town about a month after the floods of 2013 – which shut down Highway 11 in a few spots – and the waterfalls were still running high.

Bracebridge has all of the hallmarks of rural/northern Ontario touristiness – the tacky shops, the hokey Canadiana, and big weird random big things for the kids. 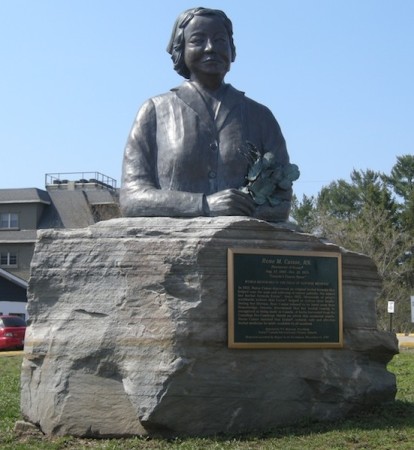 On my last visit, volunteers were repainting Bracebridge’s old hydro station – it’s going to be a town museum. 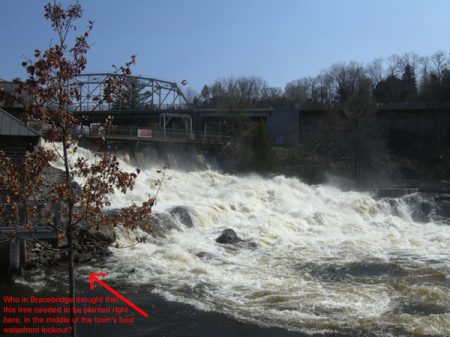 This tree location makes no sense. Come on Bracebridge!  Way to ruin a great photo spot. 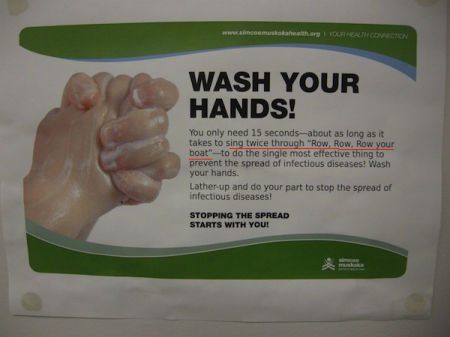 So this Ontario Public Health sign was up in the washroom of the visitor’s centre, where I parked in Bracebridge. And I got to reading it. Does anyone truly wash their hands for a full 15 seconds? This was news to me. So I followed their advice – and proceeded to thoroughly wash my hands … only to be interrupted by a knock on the washroom door.  The staff attendant wanted to check on me to see if I was alright – apparently I had been mindlessly singing “Row Row Row Your Boat” just a little too loudly.