I’ve been to Huntsville at least four times, if not five.  Yet nothing really rings a bell.

I’m trying to think of what I’ve done in Huntsville, other than eat and get ready for Algonquin Provincial Park.  (Not that I have much to get ready for, being a day tripper and all.  I’ve certainly never ventured off the beaten path.  I doubt I’ve been more than a few miles from the highway.)

I once bought a flask though at the Northern General Store on the main drag right across from the Pita Pit.  Another time I had an extra pickles veggie pita too.  I once used a pita from the same Pita Pit to convince the local Beer Store (or was it LCBO?) to stay open an extra five minutes.  I’ve been to the bank in Huntsville. I got super ridiculously lost trying to find the Swiss Chalet in Huntsville.  But…most of my memories are of Algonquin.  I think that pretty much sums up my activities in Huntsville. 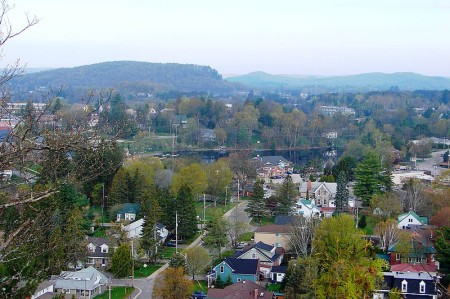 Huntsville from a lookout. (Credit: User P199 at Wiki Commons.)

Huntsville is the last real town on Highway 11 before North Bay and is also the last major centre in Muskoka cottage country. Huntsville is an important cottage and camping area, boosted by two fancy resorts, close access to Arrowhead and Oxtongue Lake Provincial Parks, and the busiest access point to Algonquin Provincial Park.

Huntsville is pretty cute.  There’s a nice little winding downtown (that reminds me a bit of Kirkland Lake, but nicer) that skirts around the lake, and the town is very much cottage country magnet full of stores and services both useful and tacky.

Statue of Tom Thomson, group of seven founder (though he was never a member)

Huntsville hosts an annual arts festival.  The town is home the Muskoka Museum, an art gallery, and the new Algonquin Arts Theatre which produces plays during cottage season.  There is also an annual book reading festival, the Firefly Festival in July, and a summer car show.

Founded in 1869 as an agricultural post, Huntsville today is a town of 18 000 focused on tourism, cottaging, and a bit of manufacturing.  Algonquin Provincial Park is about 60 kilometres east and that means that there are numerous lodges, inns, motels, and outfitters in and outside of the city.

The Wolf Den Bunkhouse, about 30 minutes east in Dwight, is a great little hostel with cottages as well as single rooms in a neat log house.  In addition to a Pita Pit, Huntsville has a Harvey’s, an East Side Mario’s, a Swiss Chalet, and a movie theatre.

Huntsville also has two top notch resorts – Hidden Valley and Deerhurst, the latter being where Shania Twain got her start.  There is train (not twain) and bus access from the ONTC, and Huntsville is the proud owner of a one-route municipal bus system. 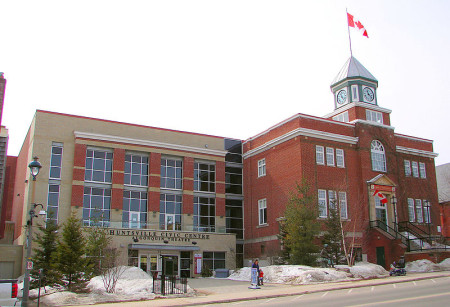 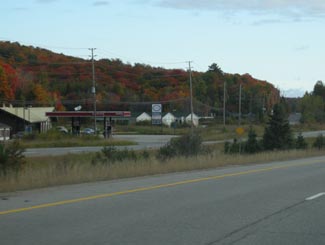 Highway 11 is littered with B-list motels near Huntsville that look empty and forlorn in the off-season.  But in tourist season, they sure fill-up. 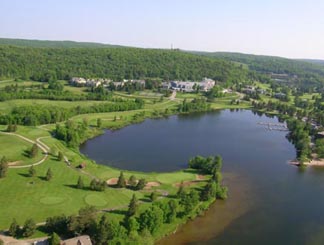 Deerhurst Resort.  Obviously not my photo.

Sure Huntsville.  You can try to steal her from Timmins but you will never succeed