Nothing says “welcome, why don’t you stay a while?” like seeing the Cold Weather test centre from your car window

Which Highway 11 town has 9000 people, more than 50 shops and services and was the hometown of the director of movies like Terminator, Aliens, True Lies, Titanic and Avatar?

Kap has some neat sites.  The old Ontario Northland train station has been recently fixed up and has a little area for art exhibitions from the area.  There’s an old locomotive adjacent to the station that houses train memorabilia and neat facts about the CNR’s history.

Kap’s entry into the “some big weird thing” – a bear

Originally named Macpherson, the ‘model town of the North’ was built around the pulp mill that originally supplied paper to the New York Times.  When they built the mill, they decided to build a company town, and since it was a company town they planned it as the ‘model town of the north’ complete with planned parks (quite nice), its own power supply (which used to serve the town and mill exclusively), and an English-style traffic circle, which residents and visitors alike find confusing to this day.

With about 9000 people, Kapuskasing is the largest town on Highway 11 between Kirkland Lake and Thunder Bay.  It’s even has its own spot on the North American professional lumberjackery circuit.  Every July the Kapuskasing Lumberjack Festival is broadcast live on television across Canada, and maybe even into the States. (Heck, Canada doesn’t even have a soccer league, but it has a lumberjack circuit?  And is sustainable with stops in towns like Kap?  Who would have guessed it…) 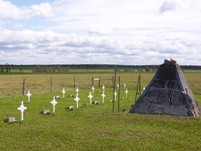 I was surprised to find, by accident, two little memorials just west of Kap.  There’s one for Ukrainian-Canadian detainees tha

t were interred near Kap during the First World War (the photo of the guy with the hat.)  Further in off the highway there’s one for German/Austrian/Turkish Prisoners Of War (the photo with the little crosses) that died while being imprisoned.

I found out from some locals at the site that during the First World War Kap was the site of a POW camp.  It was decided that

Kapuskasing was perfect because at the time the only way in and out of town, at that time, was by train.  In other words, everyone detained there was stuck – there was no way to escape and nowhere to go if you did.  They used their labour to clear land for Kapuskasing’s experimental farm, which is right beside the 24 graves of the POWs.

In addition, Paul emailed me to tell me about Kapuskasing’s former life as a station on the ONR rail line. Every time a train derailed, the local foreman of the track maintenance crew at Kapuskasing was required to file a report with the head office of ONR in Toronto. His reports were apparently quite lengthy and detailed. After receiving many of these “eloquent” and “descriptive” reports, about train derailments the foreman (named Flanigan) was advised by the head office people to write reports that weren’t so lengthy. So, after the next derailment, the following telegram was received in the head office, as follows: 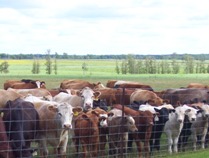 Like all the francophone towns (it’s about 30/70 anglo/franco) of the north, Kapuskasing is really quite nice.  Although a James Bay tourism brochure bogusly claims that Kap is a town of “street dances” (who wrote that thing?), there is a fair amount to do for a city of its size. 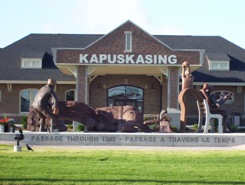 Kap’s train station is pretty magnifique, with a museum and gallery

There is a farmer’s market in the summer.  If you can make it past the downtown traffic circle in the direction of your desire, you’ll find a really nice lakefront park and some good walking paths.

Kap has a bunch of services that are too long to go into detail here.  What’s important is that there is a Tim Horton’s.  There’s a McDonald’s too.  There are some honest-to-goodness northern Ontario Chinese food restaurants.  There is a Walmart but no Giant Tiger.  Apparently Kapuskasing also has the most productive Casey’s restaurant in all of Ontario.  Take that, Front and University (the downtown Toronto location.)

Pub Max, right on Highway 11, also has good food, especially the chicken salad sandwich.  There are two touristy stores on Highway 11 in Kap, namely Marbleworks and the Moonbeam Country Store. 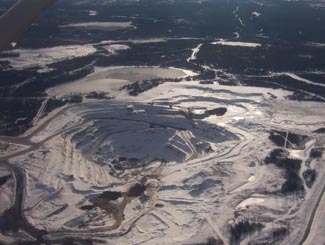 Aerial view of a mine, near Kapuskasing