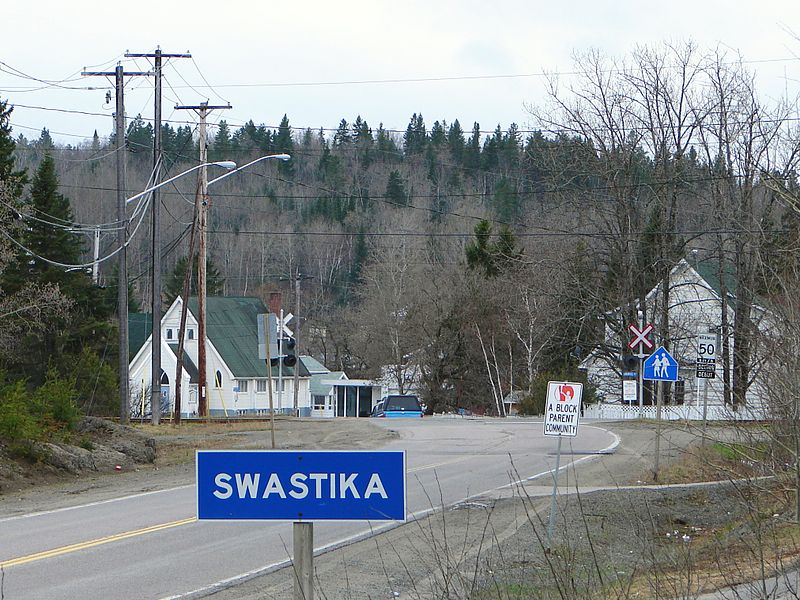 Unlike Chaput Hughes, which is on the map but is essentially a part of Kirkland Lake (hence why I don’t profile it on this website), to my eyes Swastika was a bit more separate – it seemed to have the makings of being its own little hamlet (at one point in history.)

Once again, I had to be set straight. Swastika is technically a part of Kirkland Lake. On the other side of KL, King Kirkland (which I had erroneously identified as part of the town), however, is not. I stand corrected.

Swastika is a former railroad town on Highway 66 (not Highway 11) founded in 1906.  It is here that the main ONTC line branches off to Rouyn in Quebec.  Swastika was also home to the Swastika Mining Company, which found gold in 1908 but soon went under soon after.

During the Second World War the Province asked Swastika to change its name to Winston, in honour of Churchill.  The town refused.  Someone even put up a sign stating “To hell with Hitler.  We had Swastika first.”

When driving through a few years back, I counted three churches and estimated about 60 houses in Swastika. Evidently, as per the posting below, there are more than 60 hourses in Swastika.  The Swastika Fireman’s Park has a nice little waterfront along the Blanche River, featuring an historical plaque, a bunch of ducks, and a peaceful spot to stop.

I’m not sure how many services or shops in there are in Swastika.  Corner Link Variety is one – it serves ice cream as well as normal variety store stuff.  It’s off the main road, a bit north at the base of the church pictured here. I didn’t spend a lot of time in the town, I was eating ice cream at the Fireman’s Park.

Swastika also has a train station – I was surprised to learn that the ONTC passenger service doesn’t go into Kirkland Lake, but lets you off in Swastika where you then take a bus to KL.