Stratton is the seat of Morley Township and is two towns east of Rainy River.

The Township of Morley has the coolest city logo I think I’ve seen while compiling this site (see left).  It looks like it was drawn in Microsoft Paint (much like this website), and features a sun, some waves, a maple leaf, what I think is a lunchpail (oops! it’s a silo!), and a curling rock.  If this isn’t the logo of a Canadian retirement town, then what is?

East of town is the Kay-Nah-Chi-Wah-Nung Historical Centre (imagine having to spell that website address over the phone!).  Located by the Manitou Mounds, it’s an ancient First Nations burial site that’s been commemorated with a historical centre.

The area was first settled in the 1870s when settlers first travelled to Rat Portage (I bet Kenora sure is happy about changing their name from Rat Portage…) and then travelled by steamboat through Lake of the Woods.  Fires wiped out the early town, but things were rebuilt and in 1903 Stratton became the seat of the township. Today, Stratton is a bedroom community for Fort Frances and an agricultural area, with the only cattle auction/sales centre in north-western Ontario.

Add to this page by emailing me at info (at) highway11 (dot) ca and make Stratton come alive (ok not really.) 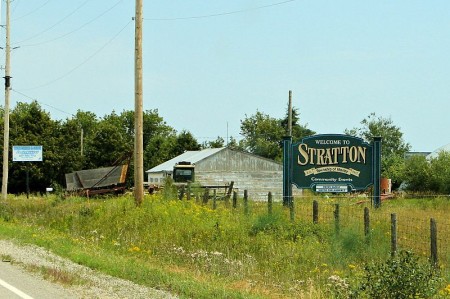