Beard’s Honey Farm in Restoule, Ontario is actually really neat. And the prices on honey were very reasonable. Try the flavoured honey sticks and the creamed honey spread.

I’m sure you get used to it.  But I suspect that when you gotta drive 40 minutes into a town like Powassan for basic services you are constantly reminded that your community is pretty small.

It seems like people around here know it.  A blog about like in Restoule – Living life in Restoule’s Fast Lane – shows that  a sense of humour is likely prerequisite to rural life in the near north.  Many of the blog posts detail the ordeal to get a cell tower erected in the community – and that, at the time of writing, was still not operational.  Ontario can be really funny.  Though by no means isolated within the grand scheme of Canada, sometimes life in rural places like Restoule surprises you if you’re from the south like me.

But just because Restoule is tiny – and it is – doesn’t mean that it is devoid of life.  There’s a local hall (Lion’s or Rotary, can’t remember) and when we took a look at the sign on the door we were surprised to find how happening the place is.  Hosting chicken wing nights, breakfasts, steak dinners, pancake suppers, pulled pork picnics – for both residents and cottagers alike – places like this show that there is a lot of life in small communities.  Just because it doesn’t jump out and smack you in the face doesn’t mean that people aren’t proud, organized and inclusive.

Named after an Ojibwe Chief, Restoule is located right between Restoule Lake and Commanda Lake, and is home to numerous outdoor activities, including Northern Pines Camp and the Lake Restoule Inn.  Restoule Provincial Park is about a 10 minutes drive west.

Restoule Lake and the Commanda River. Or is it the opposite? I can’t remember, but they’re both right near Restoule Ontario, about 45 minutes west of Highway 11.

Approximately 65 kilometres southwest from North Bay, Restoule’s official population is around 400 people.  But the village proper likely has 75 or 100 max and the population swells with outfitters, outdoorsy types, working class cottagers and American hunters in the nicer seasons.  Restoule is home to a pizza place, a cottagey-shop and a gas station. Visiting in October, we were the only people not filling up an ATV at the station.  And probably the only people that had ought a bottle of water (and not a pop) from that cooler in months.

Maybe I really need to think about removing the “Eat Local Ontario” and “My Other Car is a Streetcar” bumper stickers if I don’t want to stick out in places like this, eh?  Heck – it’s not even a bumper sticker.  I’m so lame and urban that it’s a magnet.  Don’t want to wreck the car in case of resale, no? 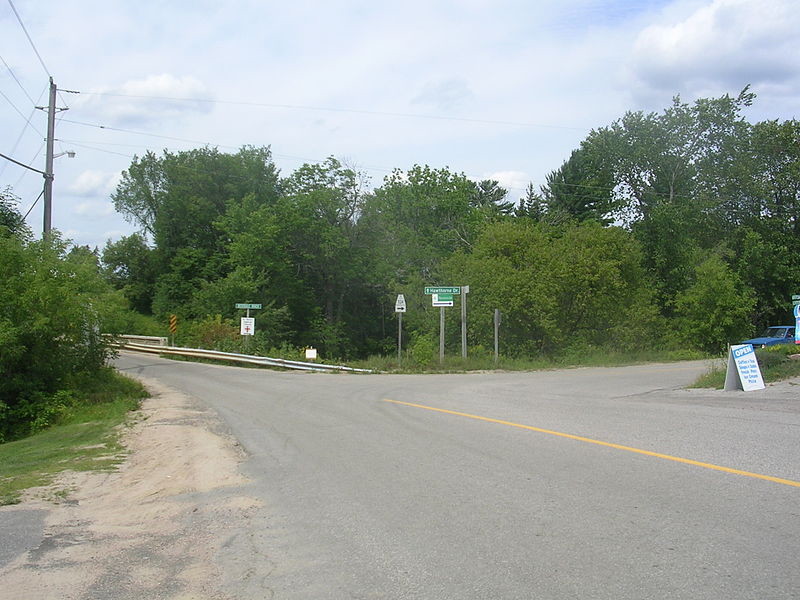 Shops in Restoule, Ontario on the main strip