When I arrived in White River I was a little grumpy as I had been driving for ages and I had no idea how long it would take to get to Hearst from there.  So ‘bear’ with me.
So I thought that there were many places that claimed the Pooh but in the end it all began in White River.  Hence the Winnie statue and the annual festival every third weekend in August. 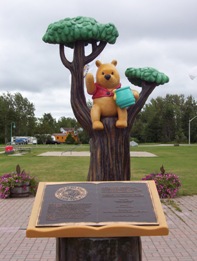 You can’t see it, but when I was here in 2006 someone had pout a cigarette on the top of his left ear.  No joke.

“Where it all began”, the town motto, actually stands for the story of Winnie the Pooh.  White River was the place where Canadian Armed Forces lieutenant Harry Colbourne bought a black bear cub from a hunter.  Being from Winnipeg, he named it Winnie, after his hometown.  To fast forward from there, he eventually went to London, the bear ended up in a zoo, some kid A.A. Milne was observing saw it, the kid liked it, the kid said the word “poo” after it, the bear got anthropomorphized and it became a huge Disney hit. OK, so I missed some steps along the way but you get the picture.

The sign when you enter White River states a population of 1000.  Any town that admits to having 1000 people probably has fewer people, because no town anywhere ever rounds down population-wise (unless you’re trying to sneak under the population threshold that means you have to have your own municipal police force instead of the OPP.  Only then it’s acceptable for northern Ontario towns to round down.) 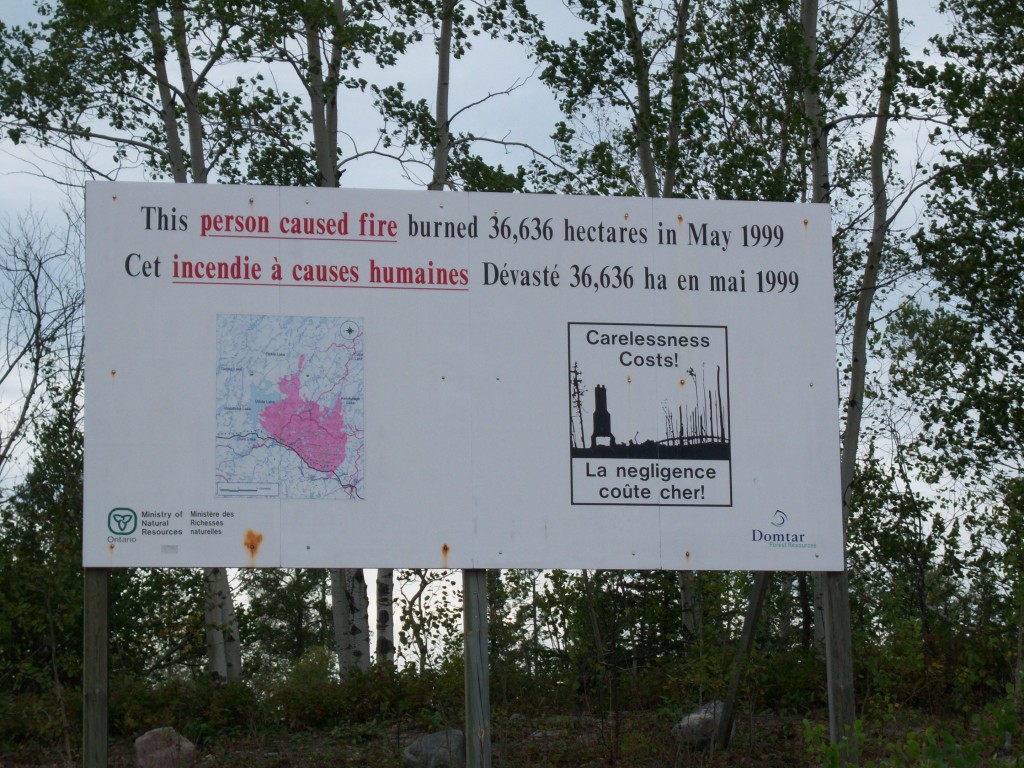 Well this kills the mood as you enter White River. (Photo credit: Patrick)

Despite only being connected to the provincial road system in 1961, there are a whole line of truckstops on the highway providing food and gas.  It was in White River that I finally caved in and tried Robin’s Doughnuts.  But I didn’t get a doughnut. I’d had enough along the way. I decided to be original…I got a muffin. And it was fantastic.  Why doesn’t Tim Horton’s have an oatmeal chocolate chip muffin yet?

On the highway there’s also a motel, and for those looking for more than a snack Tom’s Family Restaurant promises friendly service. And, if you want to venture a bit off the main road, you can enter a contest to win a free house in Manitouwadge, according to a sign about 30 kilometres west of town. I’ve only been once, but I liked White River. White River has a slightly run-down charm that I really like in small towns. The fact that a town like this has survived this long is really impressive, in my opinion. 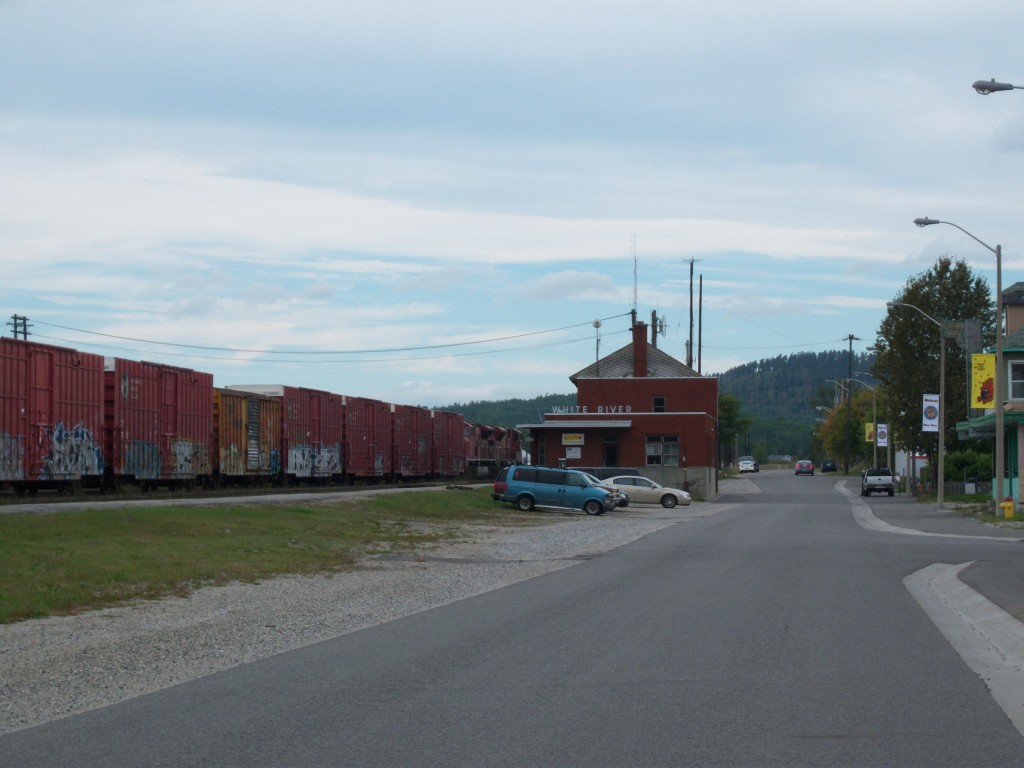 What was also weird is that to the right of the Pooh statue, there’s a “pet relief area.”  They really put aside an area 20 feet from the town’s main tourist attraction for pets to poop?  That’s gross! But handy!  I know they’re dedicated to poo(h) but this is too far!  I have never seen a pet relief area in my life.  What dog wants to wade into those long grasses?  What surprises will their paws find?  Hmm. I guess White River is “where it all began” for one Pooh, as well as “where it all ends” for the other poo. 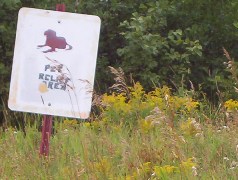 Would you want to risk wading into those tall grasses to take a crap? No, but I know that my dog would probably fine with it.

In White River, well you could visit the giant thermometer (White River has recorded the coldest temperature ever in Canada, winning it the title of “The Coolest Spot in Canada!”), you can cross country ski, visit the railcar behind the Pooh monument, go fishing or fly out to a remote lake.  And of course, there’s a woodpile.

White River also made the news, for the wrong reasons, in 2008 when a man was stabbed on a Greyhound bus just outside of town, after the culprit had been put on the bus by police in Marathon (I believe.) 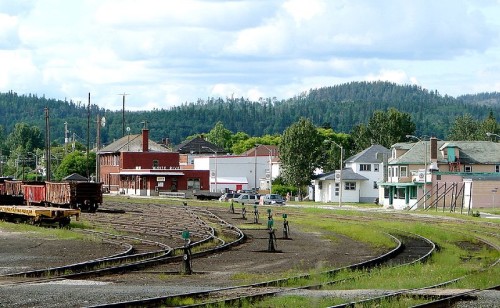 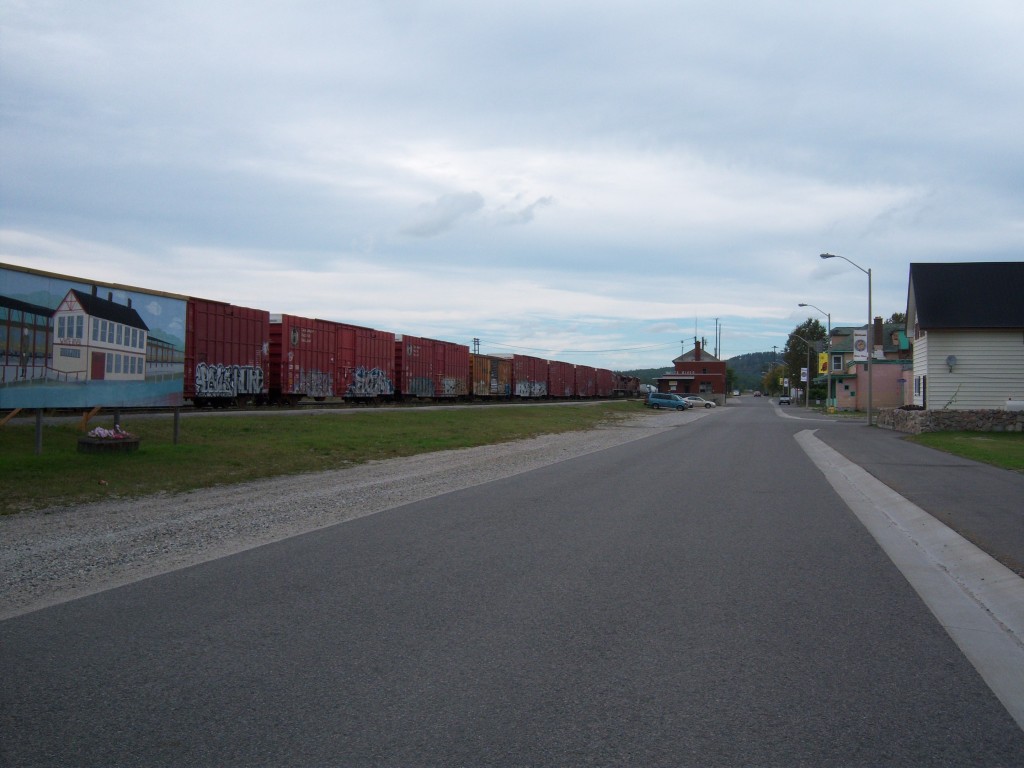