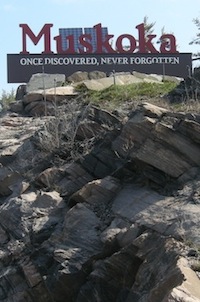 Kashshe Lake is a small cottage community a bit to the east of Highway 11 south of Muskoka Falls about 25 minutes north of Orillia.

Kahshe Lake began as a series of logging camps in the 1860s.  A guy named James Grant soon built a sawmill near the lake and others followed, eventually building a hotel and a general store.  However James Grant died and the rest fell into disrepair.  Kahshe Lake was then abandoned and eventually become a cottage community.

There two ideas of what “Kahshe” means.  Some think it came from an Aboriginal word Kah-she-she-bog-a-mog, which, according to one source, means Lake of Many Ducks and Birds.

This is cooler in person – a solar-heated seedling-starting operation in Kahshe Lake, on Highway 11

Others think that Kahshe means healings waters.  The lake itself is “Tea Coloured”, due to a high level of dissolved organics and is said to have healing properties.

Kahshe Lake Barrens Conservation Reserve is home to numerous provincially and nationally rare plant and animal species. It is ecologically significant because of its large size and lack of habitat fragmentation.

I’ve always just passed it by when driving Highway 11 but one spring I took a mid-day drive up to explore.

Who buys these things? I’m talking about the bear statues for sale along Highway 11, not the family plots at the Symington cemetery in Kahshe Lake

There wasn’t much beyond the usual-yet-random highway-facing stores of a cottage country thoroughfare, like an RV dealer, an inflatables repair service, and a store that sells Muskoka chairs and carved wooden bears.  Most notable was the Symington Township pioneer cemetery and the really cool solar nursery setup that one of the local greenhouses has on the east side of Highway 11.

North Kahshe Lake road passes through some year-round houses, ending at a small private marina.  South Kahshe Lake road leads to a small cottage community whose main road peters out into a single-lane gravel path adorned with beware of flood signs.  I didn’t go past that point, though I did stop to enjoy the absolute silence – bullfrogs, bulrushes, leaves, the wind – just five minutes from a bustling, 120-kilometre per hour highway.

Severn Bridge, Ontario on Highway 11 / Yonge Street – the town sign, the community hall and the church

Severn Bridge was named after the Severn River, which divides England and Wales and is criss-crossed by many bridges.  It is on the Severn-Trent Waterway that connects the Trent River to Georgian Bay via the Severn.

Severn Bridge was founded in the mid 1800s as a logging camp.  From there it developed: the post office came in 1861, the railway in the 1870s, and Highway 11 in 1927.  Today it is a town of about 300 half way between Orillia and Gravenhurst.  There is a small hydroelectric dam and otherwise it’s all about cottage country tourism.  And bird breeding.

Cute but tiny Severn Bridge is one of the first highway-side towns you north of the Lake Simcoe strip of Highway 11 just outside of Orillia.  Severn Bridge straddles Highway 11, with the Rowing Club and the boat dock and the Shamrock Bay Marina east of the highway and the town proper, including a local potter, an independent gas station, two auto repair shops, an old community centre, a really nice elementary school, and an agricultural society on the east side.

Close by there is the Muskoka Wildlife Centre which offers education programs for kids.  Severn Bridge has two bed and breakfasts (Sparrow’s Nest and Severn Shores) and hosts an annual fall fair at the agricultural society grounds. 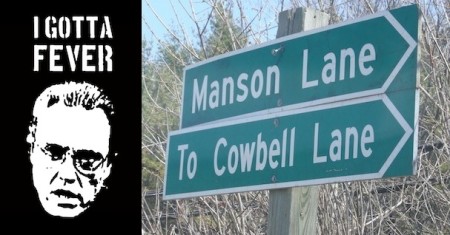 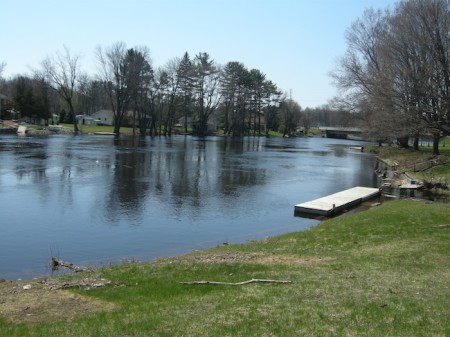 Severn Bridge boat launch on the Severn River, right by the rowing club. If I recall correctly, the dock is not public 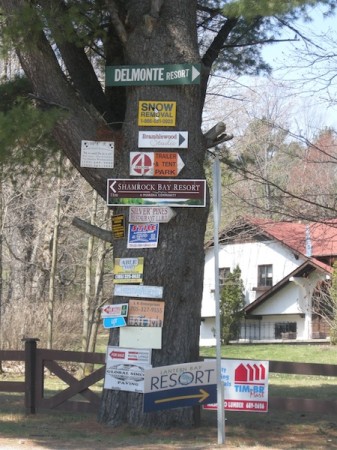