Thunder Bay has a big random curling rock statue?  A massive four city-block-long woodpile? Statues of arctic animals that live nowhere nearby?  Thunder Bay may be the big city but we’re still in northern Ontario.

I once heard a pretty prominent Canadian comedian joke something to the effect that there’s a reason that the Marathon of Hope ended in Thunder Bay.

I never really got the joke.  Maybe it’s because the city’s initials stand for a deadly disease, but I haven’t figured out what he was talking about. I like Thunder Bay.

TBay has a list of things going for it. TB has probably the best lookout on Highway 11 at the Terry Fox memorial.  It also has a majestic port bordered by rock formations on both sides.  There’s a pretty decent rap song about the city that was recently written up in the Toronto Star. It is the hometown of the most pro hockey players per capita. They have their own special foods that you can’t get anywhere else – superflat Finnish pancakes and their own type of doughnut. And I’m told that it has the largest Finnish population outside of Finland (more than 10 000…) 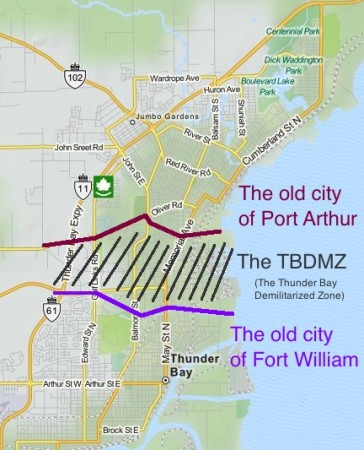 The TB DMZ. Keeping hostilities between Port Arthur and Fort William to a minimum since 1907.

So how did they choose the name “Thunder Bay”? I have no idea if this is true, but I once read in a book that when Port Arthur and Fort William merged in 1970, they couldn’t decide on a common name. In order to solve the problem, they held a referendum. As always, the voters were split. Some thought it should be named “Lakehead.” While others preferred the more regal-sounding “The Lakehead.” When the final tallies were counted, the two Lakehead options combined had a majority of votes. However, with the two camps splitting most of the vote, plucky little “Thunder Bay” slipped up the middle to win a plurality. Is it true? I don’t know, but I wouldn’t be surprised.

It’s as if the two cities are still buffering against each other, or just don’t know what to do with the space between them. Is there animosity?  Bobby Curtola is from Port Arthur.  Paul Shaffer is from Fort William.  I don’t know if a rivalry exists, but there’s potential…

My first car had only AM radio. Which means only oldies music. Which means you hear a lot of Thunder Bay’s Bobby Curtola so the station can be in compliance with CanCon requirements.

Thunder Bay has a lot of variety in neighbourhoods.  Many parts are littered with old northern hotels and taverns (a la Timmins), while some residential areas have stately turn-of-the-century homes (a la Haileybury), while there are the 1960s suburbs (a la Etobicoke, but with bigger lawns), while Walsh Street is essentially a paved hydro corridor with homes on either side (a la Longlac.)  The whole situation means that, while Thunder Bay is a really nice city, it can be sprawly, confusing, and makes for horrible driving.

A not-so-great photo from yours truly of The Sleeping Giant, from Thunder Bay’s waterfront

Of course, nothing says ‘Thunder Bay’ to the history-conscious Canadian than grain elevators.  The prevalence of shipping means that the city is criss-crossed by train tracks, which pretty much cut off the city from most of its waterfront, save for a nice park in the north.  I think that the port in south Thunder Bay is bigger, but that the elevators in north Thunder Bay are near the waterfront park and therefore make for nicer photos.  There are beautiful views of Sleeping Giant (the big rock formation off the harbour) from both the waterfront marina park or from Hillcrest Park on High Street.

One of the coolest thing about Thunder Bay is the massive rock-bubble-things that border the south part of town.  You can’t miss them no matter where you look to the south.  They’re called the Nor’Westers (after the fur traders) and the largest (Mount McKay) is open for cars to drive up, for a small fee.  There’s something Rio de Janeiro-esque about it – they just need a statue on top, looking down over the city.

Maybe they can put a statue of a famous Thunder Bayer up there.  Again though, who to choose – Port Arthur’s Bobby Curtola or Fort William’s Paul Shaffer? I’ll pledge 50$ to that. 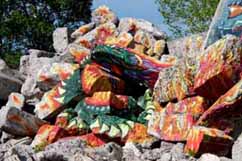 Flashes of the cosmopolitan. (Photo credit: Lloyd from Wild Goose)

Thunder Bay wins the north’s big city sweepstakes not only because it is the subject of a rap song (click here, the video is surprisingly good) or the presence of art graffiti but also because, compared to the rest of the north, Thunder Bay is practically a metropolis:

But nothing shows off Thunder Bay’s cosmopolitan flair better than its International Friendship Garden.

The Garden was founded by various ethnic civic organizations to commemorate Canada’s centennial in 1967.  You can meet Croatia’s King Tomislav.  You can pose with the concrete geese representing Finland.  Italy, Scotland, Greece, India, the Philippines, and others are all there too.  It almost feels like a ‘mini-putt your way around the world’ exhibit that you’d find on Highway Six south of Hamilton.  Maybe it’s the Dutch windmill.  Or the random Italian villa surrounded by a chain-link fence.  Or maybe it’s the sawmill from Deutschland, which I thought was a garden shed until I spotted the faux waterwheel (sans water.)

However, you have to give TB some credit here.  It’s actually pretty cool and totally endearing. Most cities couldn’t have attempted this.  Fewer would have even considered it.

It’s more than a bit hokey, but that’s what makes it undeniably charming.  Sure, the Confucius statue and adjacent mini-pavilion looks like it could be beside Chinese restaurant in Markham, but who cares?  It’s a great park and apparently one of the ‘in’ spots for wedding photos in Thunder Bay.

No, we’re not on the set of Logan’s Run, these are the Finnish, Italian and Slovakian monuments at the Thunder Bay International Friendship Garden

The Norwesters.  These look so much bigger in real life

A Persian is like the oil-soaked goodness of a fresh farmer’s market doughnut and and the sugaryness of a Beavertail all rolled up into one bundle of super fatty northern Ontario goodness. As one of my co-workers has told me, she works with people in Thunder Bay and when she asks them about Persians, she could practically hear their mouths water through the phone. When she goes there for meetings, she buys two flats and brings them back from Thunder Bay on the plane, and only one flat makes it back alive. But if you’re gonna take the plunge – make sure you avoid the chocolate and go for the real thing – the one with the pink topping. 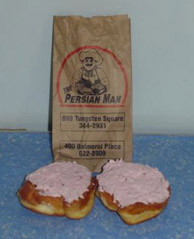 Persians – unique to TBay, tho eerily similar to the Paczkis of Cleveland or the doughnuts of pretty much anywhere else.

There are two locations that sell Persians (the doughnuts – not the ancient peoples) – one on Tungsten (out by the university), and one on Balmoral. Just look for The Persian Man.

For non-doughnut grub and shopping the major streets are Red River and Memorial in north Thunder Bay, and Arthur in south Thunder Bay.  There is a real mall, a movie complex, the only Swiss Chalet since North Bay, some other chain restaurants, but no Giant Tiger (disappointing.). At one time, TBay had the only East Side Mario’s since Timmins but Keith emailed me to deliver the bad news – it is closed.

As far as culture, the Thunder Bay Art Gallery on the campus of Confederation College had a great Norval Morrisseau exhibition while I was there.  The gallery is small, but entrance is ridiculously cheap.  Thunder Bay also has a symphony, as well as a charity casino.  The corner of Algoma and Bay in north Thunder Bay is a bit of a hip spot, with some pubs, a hostel, and specialty shops nearby (a Finnish-language bookstore, and Finn-tastic Sauna and Gift Shop).  While I was there, an Italian festival had blocked off the intersection (beer tent + meatball & sausage stands + old nonnas telling you to eat more = my kind of thing!)  There’s also a really nice ballpark in Port Arthur that hosts The Thunder Bay Border Cats, a minor league team in one of the American independent leagues.

But as soon as you get start getting visions of grandeur, Thunder Bay returns to its northern roots.

There are all-you-can-eat cabbage rolls and pirogi every Friday from 12-1 at the Polish Hall on Algoma.  The Superior Bowladrome is one of four bowling alleys I counted in TB.

(Where I grew up we had double the population but only half the bowling alleys.)

There are the second- and third-tier franchises some common to the north – Robin’s Doughnuts gives Tim Horton’s a serious run for their money in northwestern Ontario, and especially in TB.  There is Tacotime, some sort of Mexican franchise that has placed its geometric cacti throughout the city. (This picture does not do those catci justice. And the food is pretty good too…)

Taco Time! I’ve been obsessed with Taco Time ever since I visited the one in Thunder Bay (left photo) and came under the spell of its sort-of art deco cactus. I was overjoyed when I found one on my honeymoon in Logan, Utah, and when another opened in the Atrium on Bay in Toronto. Sadly, the Torontonians have no taste. 🙁

But for a real Thunder Bay meal, you need to go to the Hoito. It’s a diner serving traditional Finnish food, and in its heyday it was a focal point for the very politically-active Finnish community. There’s even been a book written on stories told in the diner. It’s located in the old Finnish Labour Temple, which the local community is working hard to restore.

There are also the totally random people.  I saw kids sitting unseatbelted (not even strapped in with a rope or duct-tape) on a flatbed truck, as well as roving from side-to-sid

e in the cargo hold of pickups. This wasn’t just in cottage areas, but on main drags like Arthur.  I learned that Vampiro, Canada’s top wrestler on the Mexican lucha libre circuit hails from TB.  In one of my strangest (?) memories, I witnessed a man smoking a cigar walk out of his home with his dog on a leash.  He walked across the street to a cemetery.  He let his dog poo in the cemetery, and he walked right back across the street to his home.  Gross, but funny. (Maybe this is the sort of thing that inspired White River‘s pet relief station.)

Finally, you know Thunder Bay is a true northern town as it obeys the two main laws of Highway 11 – that each city must have something big, and something in a pile.  Thunder Bay has both – its five-foot tall curling rock, and the ever-popular pile of wood. 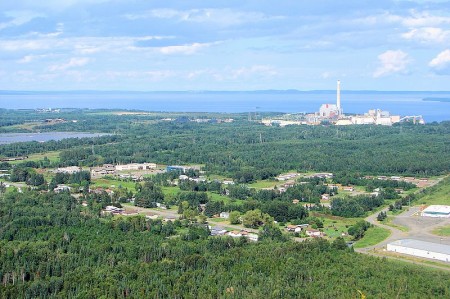 I used to have these teeny-tiny 200 pixel square photos of the Thunder Bay waterfront on this site.  What would this website be like without User P199 at Wikimedia Commons saving everyone from my pitiful photography?  (The photo at the top of the post is also his.) 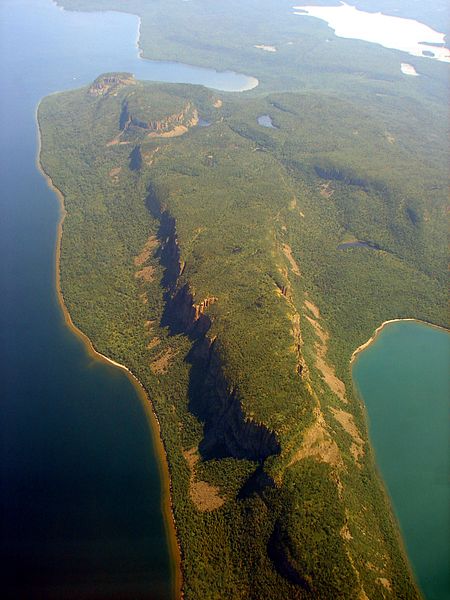 An absolutely killer photo of The Sleeping Giant, thanks to Wiki Commons contributor P199