Reesor Siding, three kilometres west of Reesor proper, is the site of one of Canada’s bloodiest labour conflicts and the inspiration behind a really good Stompin’ Tom song.

On Highway 11 there is a memorial to the Reesor Siding Strike of 1963, a defining moment in Canadian labour history whose division still exists to this day.

From what I’ve read and been told, it all began when a local lumber union walked off the job.  They were supplying wood to the pulp mill in Kapuskasing.

Some local farmers decided to break picket lines and supply the Kapuskasing mill with wood.  This angered the local union.

This led to a stalemate where the union sabotaged the farmers’ efforts to supply wood, and the farmers refused to support the strike.  When some union members went to disrupt a secret midnight shipment of wood, an altercation broke out.  Three strikers were shot, 11 others were wounded. In the end, something like 20 individual farmers were charged with murder for the one resulting death, which was a record as the largest murder trial in Canada. More than 150 strikers were arrested for rioting, and were held for two weeks at the correctional centre at Monteith. 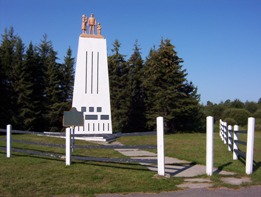 The memorial on Highway 11 was erected by the local union, to the dismay of some locals.  The Reesor incident remained a sore point for some time.  Supposedly, the first time Stompin’ Tom sang his song “The Reesor Crossing Tragedy” at a concert in Kapuskasing, he was run out of town…

Reesor Siding, at its height, had about 100 residents, after a number of Mennonite and fraco-Ontarian families took homesteads after the ONR railway moved in in 1915. A store was opened in 1924, and a sawmill, Mennonite church, cemetery, and tennis court. A school came in 1927. However, with the hardships of the Depression, families generally left the area, and farming families struggled.

By the time the Reesor Siding incident happened, only a few farm families were left in the area.

“Just a little bit west of Kapuskasing, Reesor Crossing, that’s the name.
Farmers hauled, from out of the bushland, pulpwood for the mill-bound train.
Twenty farmers met that night, to guard their pulp from a union strike, unaware this night would see a tragedy, the Reesor Crossing Tragedy.
“You’ll never load that pile of lumber”, said the Union men, when they came.
Though they numbered about 500, the twenty farmers took rifle aim.
“We’ve got to get our pulpwood out, before the muskeg frost comes out”.
“And may God help us all to see, no Reesor Crossing Tragedy”.
“You’ll never touch this pile of lumber”, but they came, and tragically, three men died, that february, in the year of ’63.
Eight more wounded, some beat up tires slashed on the lumber trucks. A night of death, and destiny - the Reesor Crossing Tragedy.
“You’ll never touch this pile of lumber”, seven words that spelled out pain.
For the widows and their children, and their men who died in vain.
How can anyone forget, the bloodiest labour battle yet, in all Canadian history?
The Reesor Crossing tragedy.
Just a little bit west of Kapuskasing, they erected a sculpture beside the tracks.
Of the bushman and his family, who live their lives behind the axe.
It reminds us in the North, not to bring out tempers forth
That there may never elsewhere be  no Reesor Crossing Tragedy.”

Lyrics from “The Reesor Crossing Tragedy” by Stompin’ Tom Connors (1968).

Leave a Reply to no name Cancel reply